We went back to our neighborhood before the match and had dinner at Bodeans, an establishment we walked by several times in our jaunts around the neighborhood. I had the Famous Burnt Ends (you could choose wet or dry; I had wet, which means with sauce) and my husband had the pulled pork sandwich. The Burnt Ends were marvelous. For dessert I had homemade honeycomb ice cream and my husband had apple crumble. I can’t speak for the apple crumble, but the honeycomb ice cream was amazing. The honeycomb in the ice cream was crispy and gave off just a hint of honey. Delicious. 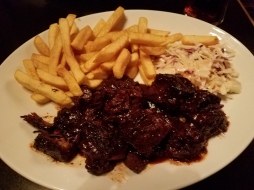 It was time to head to the match. And all I could think, all the way there, was this: “I am the luckiest girl in the world.” Yeah, it hasn’t been the greatest season (you could say it’s been lousy) and I haven’t been able to attend as many matches this year as last year, but every time I get on the Piccadilly line to go to the Emirates, I have a feeling of complete excitement. It builds and builds as we go from the Arsenal stop along Gillespie Avenue, up Drayton Park, up the stairs, and across the Ken Friar Bridge. We feel it through the turnstile and as we approach our seats, watching the warmup. Anything can happen that day, and everyone there knows it. I’ve been able to know it multiple times this year again.

There was supposed to be a big protest in advance of the West Ham match by the Wenger Out crowd. They were planning to stay out of the stadium for the first 13 minutes of the match, one minute for each year we haven’t had a Premier League trophy. I have no idea if they did it or not. The stadium was packed as of kickoff, and there was no notable change at 13 minutes. The crowd was in fine voice throughout. On my right, in the seats that contain new people each time, was an American who required much explanation of what was happening in the match, which his also-American associate delivered with reasonable accuracy and far less impatience than I could have mustered.

West Ham has also had a rough patch of late so the match could easily had been quite the Bumble Bowl. With the exception of a few shaky moments early in the match, Arsenal dominated this one. Our goalkeeper this day was Emi Martinez, our backup goalkeeper’s backup. (Arseblog had noted before the match that at least he is goalkeeper sized.) He had a fine match and made a few key saves. Laurent Koscielny was not back in the lineup after his injury before halftime during Sunday’s match, but Gabriel had a decent match in his place. Andy Carroll, the meaty-headed West Ham forward who has had much joy against us in the past couldn’t do much of anything against our guys.

The refereeing in this match was far worse than in the Man City match (itself pretty poor). It boggles the mind that Martin Atkinson continues to get Arsenal matches. Three obvious penalty calls waved away. Meanwhile, he didn’t see much contact from Arsenal on West Ham players that he failed to judge a foul.

Overall, Arsenal’s passing was better, and by the time the second half was underway we were looking more and more dangerous. The Arsenal fans had started an epic rendition of the previously-mysterious “Red Army” chant that carried us though our first goal via a shot from Mesut Ozil where it seemed Alexis Sanchez proved enough distraction for the keeper to let a relatively tame shot in. Even the American next to me, who recently had seemed more interested in his phone, celebrated. The fans began chanting the famous One Nil to the Arsenal that was established many years ago when Arsenal was famous for grinding out 1-0 victories.

The next goal was a quintessentially Arsenal goal that included fabulous movement, an Alexis Sanchez back flick to Ozil, and a killer pass to Theo who slotted it home. And the third came in the form of a nice dribble and pass from Alex-Oxlade Chamberlain to Olivier Giroud, who made a curling, long-range shot.

The final whistle blew and my husband and I ran down the stairs, out of the Emirates, over the Ken Friar Bridge, down Drayton Park and  Gillespie Avenue, and through the Arsenal tube station, the entrance to which had been constrained to funnel the crowds toward the trains arriving to whisk us away. 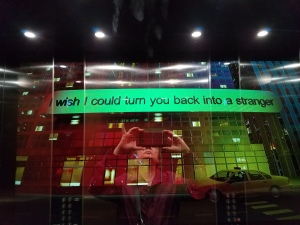 A West Ham fan had managed to make his way onto the train with us and he said loudly that Arsenal was no longer Arsenal, we used to be a good team but no more. He protested that he was not just being an asshole, just stating facts. He acknowledged that he might be making people mad.

I didn’t feel mad (although I internally disagreed with his assessment that he was not an asshole.) What I felt was that Arsenal is my team, bad and good. Arsene Wenger is my manager, bad and good. I couldn’t change those things if I wanted to.

But I don’t want to.