I haven’t completely kept my vow to take a true break from football. Maybe only one day I didn’t read Arseblog. I read only the most benign things on Football 365. Benign is about all they have right now. Technically, there are some international friendlies and Olympic qualifying getting ready to happen and then there might be some actual news of the “who-cares, not-me” variety. There has been some transfer gossip, mostly a bunch of baloney. It came out that Ozil would leave Arsenal if Arsene Wenger stayed. Then Ozil took to Twitter to say Wenger was a big reason he came and that hasn’t changed. Equivalent nonsense about other players came out.

The only real news was that amazing Dutch player and coach Johan Cruyff, so much an inspiration to our Arsenal hero Dennis Bergkamp, passed away of lung cancer at the age of 68. Quite sad. He has a lasting legacy well beyond the famous move he created to evade defenders, called the Cruyff turn. Young soccer players work hard to have that turn in their arsenal.

Apropos of my stated quest to plan for alternate life without regular jaunts to the Emirates, an interesting tidbit came out about our beloved Alexis Sanchez. He said his favorite means of relaxing, in addition to hanging with his dogs, was playing the piano. He said he wasn’t a great pianist but he just enjoys playing. It’s an outlet to separate briefly from an all-consuming profession.

In my brainstorming about the future, I’ve thought about taking up my dulcimer again. I got a mountain dulcimer not long after I graduated from college, a gift from my parents for Christmas. Although it was formerly believed that dulcimers were brought to the state by Scottish and Irish settlers, they are now thought to have been first made in Appalachia by these settlers. My dulcimer was made by Warren May in Berea, KY. I learned to play on my own for a while and later took lessons with Doug Berch in Denver. When he looked at my dulcimer in the first class, he recognized right away that it was made by Warren May. Warren May built his dulcimers with distinctive, carved tuning pegs. They are beautiful, but not easy to use to tune. Newer dulcimers have more modern tuning pegs. By the time I was taking lessons, that was more often the case than not.

It’s easy to learn how to play basic songs on a dulcimer, but as with all instruments, more complexity requires more devotion. I haven’t played much at all in the past 20 years. At some point my mother took up the instrument and now plays with and leads a group of dulcimer players in KY. She loves the companionship of her group and has developed a real passion for the instrument. She has several Warren May dulcimers. He is still at it after all these years. When I was in Kentucky for Thanksgiving, we took a quick trip to Berea and stopped in his shop. He and Mom played a few songs together.

The dulcimers Warren May is making nowadays have the more modern pegs, but each time someone come in his shop to replace the traditional carved pegs that came with their dulcimer with the modern ones, he saves the carved pegs. He said in his last year of making dulcimers before he retires, he’s going to make only dulcimers with the traditional pegs. He showed us a large stash of carved pegs he has set aside for when that time comes.

I love it that he changed his ways to continue to have enough commercial success in the business to stay in it, but that he has a plan for doing things the way he wants to for that one year of his life.

Even though it’s momentarily tempting to step back into playing the instrument, it’s not the travel-to-London-to-watch-Arsenal-live replacement I need. I do love listening to music, all kinds, but playing music isn’t my thing, really. I can’t see becoming passionate about it.

This week my husband suggested that we attend a Chicago Symphony Orchestra program taking place in a suburb close to our town. My husband loves piano music and one of the pieces the Symphony was playing was Rachmaninov’s Piano Concerto No. 3, one of the most difficult piano pieces there is. Having a plan for a mid-week concert cheered me up quite a bit.

Rachmaninov’s Piano Concerto No. 3 is not uniformly a relaxing piece; it contains plenty of drama. But I barely slept the night before we went. So although I could tell that Denis Matsuev was putting in a tremendous performance of a great composition, I got plenty of shuteye during it. I really appreciated the big, dramatic ending, but what proceeded it is somewhat muddled. I kept waking up and thinking “wow–he’s amazing and this is an amazing piece,” before I passed out again. When the audience jumped up at the end to cheer, I stood up and stretched a bit and then stood at intermission in the women’s restroom line near the doors to the street. It was refreshingly cold and that woke me up. 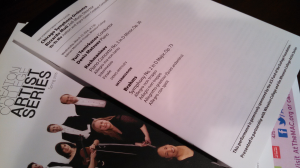 They rolled the piano away at intermission. The second piece was Brahms’ Symphony No. 2 in D Major, a mostly cheerful piece with a little drama. The audience near me seemed somewhat let down after the first piece. I knew how my husband felt about it, and the woman to my left spent the whole time leafing through her program. She had been one of the first ones to let out a whoop at the end of the Rach 3, as people so casually call it. Just like they call Les Miserables “Les Mis,” but I think that’s because they don’t want to have to pronounce “Miserables” with their notably lousy French accent. (That’s why I don’t.)

So, refreshed from my nap and standing in the cold, my attention was captured for a moment by a violist. There was something different about her in comparison with the other musicians. She was playing as if her body was part of the music, with her head leading the way. This is a trait that her teachers probably spent time trying to break her of. It’s maybe how a listener takes music; you want to dance. But musicians, especially orchestra musicians? I suspect their job is to blend in. To do their talking with their bow arm.

I have noticed in the past that this is how my daughter plays the violin. She is feeling the music, and feeling it deeply. She doesn’t love playing the violin the way she loves playing the piano but when she plays, it captures her and takes her along with it. She’s more contained when playing the piano. Her piano teacher has worked with her to put the music in her fingers and not in her body.

The use of the bow requires technique and precision and, naturally, all these musicians in the Chicago Symphony orchestra have technique and precision in spades. There was something else that caught my eye during the Brahms piece I realized I’ve never noticed before. There is a tremendous amount of risk taking in the way these most gifted musicians were playing. They momentarily draw their bows in a wild way that makes the music ring out. It must be very difficult to learn to control a bow that is being wielded recklessly. But controlled recklessness must be part of what it takes to be great.

As almost everything does, that reminded me of the very football that I was supposedly taking a break from. To become a great football player, you must be excellent at taking calculated risks. You become excellent by taking lots of risks, and by learning from taking these risks how to control the possible cost of the risks. A player who can’t learn how to calculate risks can be quite dangerous to a team, but a player who doesn’t take risks probably can never become excellent.

The Cruyff turn. Learning it is one thing. Throwing it for the first time in a competitive match takes guts, a risk. But fortunately, you can try it again and again in practice until it feels almost natural to give it a whirl.

Alexis Sanchez is a taker of calculated risks on the football pitch, playing with verve and passion. Piano is what he does to relax. But football doesn’t last forever. If Alexis Sanchez starts to take the same risks with his piano that he does in football he might never become a great piano player but he will certainly wear that instrument out.

So, the Chicago Symphony Orchestra. As you can see, I stayed awake during the Brahms and was fascinated by the orchestra, but my mind wasn’t completely on the music. The experience did add additional color to my internal discussion of what’s next.

One color: to consider pastimes for which the risks available are attractive to me such that it will be somewhat natural to want to take them. Another, almost the opposite, is to not disregard pastimes that stand a chance of producing little more than relaxation, a distraction, away from my professional life. It’s good enough for Alexis, why not me?

And a last thought:  Maybe I have to try a lot of different things, and not reject anything outright.

Even the dulcimer. I just tuned it using the carved pegs. Not easy, Warren May! Let’s see if I remember anything.