When my son was a toddler his obsession with trains that seemed as permanent as God suddenly ended. It was replaced by an absolute addiction to winning. Winning at games, winning at sports, at cards.  He was a poor winner and a poor loser. Thinking about Jose Mourinho, those traits so often seem to go together.

As soon as my son understood how brackets are used in tournaments, he developed an obsession for making all decisions using brackets. Need to decide what gifts to ask for from Santa? Plot the choices on brackets and call the matches. Video game beats Yo-yo. Bike beats video game.  He had a picture book of cakes that could be decorated. He would plot them all in a giant set of brackets and then spend hours making everyone in the household choose the winner of each cake match. Turtle cake beats Clown cake. Bus cake beats Turtle cake. And so on, until the Best Cake Wins.

He began playing soccer in our basement and in the yard with whomever he could convince to play. The rules were complex and he was the enforcer. A goal couldn’t bounce off the wall first, for example. He called the fouls. He was critical. Once he embarrassed us completely by telling our adult friend who had been forced to play, “You are dreadful!”

He would say “You owe me soccer, Dad.” My daughter once wrote an amusing poem for us for Christmas called The Land of Nutmeg.  (For you non-soccer people: a nutmeg is kicking the ball through someone’s open legs.) Each verse covered a different member of our family and their role in The Land of Nutmeg. The verse about my husband was

Daddy O plays the most

In The Land of Nutmeg

He wakes up owing soccer

He goes to bed owing soccer

He is one soccer-owing man

We were worn out from all the competition required and enrolled my son early in park district soccer. He played for the Sea Turtles, a team accidentally so good that a coach for another team referred to them in my son’s presence as The Dreaded Sea Turtles. My son was upset. He thought “Dreaded” meant the same as “Dreadful.” Payback for my friend.

When my daughter first played soccer, we told her “If you had fun, you won.” We did the same with my son. At the age of 4, he was having none of that Liberal BS. “If you scored the most goals, you won,” he corrected us.

He began watching football on TV in the morning with his Dad. He knew every manager, all the important players. He talked about them nonstop, asking his Dad for information and updates at every meal. He became a Chelsea fan, much to my husband’s dismay. Mostly because of my husband’s dismay.This was during Jose Mourinho’s first stint at Chelsea. My husband worked hard to move him off this point of view. “You don’t really like those Chelsea Cheater Wheathead Eaters, do you?” he’d say. At some time during this period, I took a first trip to London for business. It was as fast as our excursions are this year, maybe two nights on the ground. In the three hours I had available to tour, I found a shop in Piccadilly Circus and bought my son a Chelsea hat. Arsenal for my husband. I was just beginning to develop an affinity for Arsenal.

We began attending Chicago Fire matches as well. My son became a massive fan, so passionate you just knew it was going to end badly. At one of the matches, they gave a photo of the team as a promotion to the first 5,000 fans arriving at Toyota Park. My son would spend hours looking at it, admiring it, talking about the players. We had it framed. It was the first thing he looked at in the morning and the last thing he looked at before bed at night. And the Fire was having a great year. They made it to the playoffs, maybe a few rounds in. And then the worst happened: they lost to the New England Revolution, the team his Aunt Karen followed, in our presence.

He was devastated. He came home, looked sadly at the picture one last time and put it in his drawer, never to come out again. “It was such a good season, and now it’s over.” He wished evil on his Aunt Karen: “I hope New England loses next week so she feels as bad as I do!”

A non-therapist should probably never try to identify the moment of another person’s primal wound, but if I had to choose which moment was my son’s, that would have to be it.

After that he was careful to form no team attachments. He would never be burned again. He would taunt other people for their favorites’ losses, including me, by then a hard-core Arsenal supporter.

Over time he had more experiences with winning and losing, both in soccer and wrestling. He grew and became a good and gracious winner. He has never enjoyed losing, but he’s learned to lose gracefully. But still he did not form an attachment to any team, in any sport. 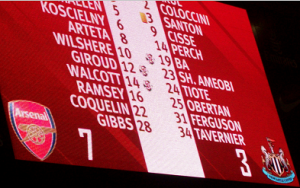 When we visited the Emirates for the first time in December 2012 for the Newcastle match, he was sucked in by the whole experience. His eyes were big, taking in the Highbury development and the new stadium, and the massive 7-3 win.  He said during the day “I’m going to be an Arsenal fan for life.”

But that feeling was actually quite fleeting. Once we got back to Chicago and our normal routine, the glory of the experience faded and he still was clearly not committed. “Your team is awful!” he told me after a particularly painful loss.

Sometime over the past year, I started noticing a change. He was watching the matches, following the gossip.

And then the biggest change of all.  “We won, Mom!” he said a few months ago. And most notably, when Arsenal lost, “Mom, we’re terrible!”

We. What a powerful word.

There literally is no “we.” Arsenal win. And Arsenal lose. “We” watch. From far away or from the stands at the Emirates. Our support should not be able to change anything.

But figuratively, of course there is “we.” Arsenal would not be Arsenal without all of us, all around the world, hoping for the best and sometimes enduring the worst. And sometimes it seems that we can change things, change them a lot.

Of all the hats in the world that we’ve had and lost, or destroyed, wouldn’t you know that Chelsea hat I bought in London the first time I visited is still in our possession? My son, now 14 and a Freshman in High School, sometimes still wears it on a cold day playing soccer because it’s the same color as his club’s kit. He covers the Chelsea insignia with a piece of tape.

Today Arsenal experienced a terrible, terrible loss in the Champions League against Bayern Munich, 1-5. I wrote this post on a plane to New York after listening to the game cast. Before I boarded at O’Hare, I was looking at my phone when I realized I was blocking someone from reading the Departure board. I looked up; it was a guy wearing the quarter-zip home Arsenal jacket. I said, “Nice jacket” and “Bad day.”  He said, “Yeah, we got our asses kicked.” I couldn’t disagree. Now the only path to the Round of 16 involves luck plus beating both teams who have already beat us. And by a good margin.

And we must pick ourselves up and prepare for Tottenham in the Premier League on Sunday. It’s a home game. Here’s hoping the home crowd “we” can help put things right.