As wins go, yesterday’s was not the most comfortable. We started brightly, but then struggled against Newcastle, one of the weakest teams in the league. None of our guys looked very energetic or particularly sharp. Mesut Ozil, The Man in the Monday match against Bournemouth, still looked good but a shadow of his Monday self. Theo Walcott, Alex Oxlade-Chamberlain, and even our Welsh Jesus produced many a d’oh! moment. (How long before you walk on water again, Aaron Ramsey?)

The one guy who looked awesome? That would be Petr Cech, our goalkeeper. He kept us in the match long enough for defender Laurent Koscielny to finally put one in the back of the net in the aftermath of a corner kick with 72 minutes elapsed.

And then Petr Cech kept us in the match some more.

The match ended 1-nil to the Arsenal. We hung on to first position in the league and even gained some ground as Leicester City only managed a tie in its match against Bournemouth.

I lost at least two years of my life during the last 10 stressful minutes of Arsenal’s match. I hope they aren’t two years that Arsenal win the league.

As happened for Monday’s match, I didn’t require the services of anyone to know that Petr Cech was Man of the Match yesterday, and so I quickly went about selecting a recipe for the Gooner Triumphal Feast. Cech is from the Czech Republic, a particularly challenging cuisine for someone who is desperate not to go to the grocery store, as I was yesterday. I selected this Česnečka (Czech garlic soup) because I had most of the ingredients on hand. What I didn’t have could be easily retrieved by my daughter, herself not so anxious to drive to the grocery. (Thanks, daughter, for taking one for the team.)

We added quiche to celebrate Frenchman Laurent Koscielny for producing the goal. He had a good game defensively as well. The other reason we had quiche was because I wasn’t too sure about the Czech garlic soup. I used my regular quiche recipe. That one is in my head.

I needn’t have worried because the garlic soup was quite delicious. We all enjoyed it.

And what was done with the time available between the match and our Triumphal Feast? I purged all kinds of junk from my basement storage room. At some point I noticed that my son was working out and my husband was organizing our insanely complicated activities calendar. If only someone was dieting, we’d have achieved the full slate of New Year’s clichés.

But we weren’t dieting. The Gooner Triumphal Feast demands feasting.

And so we feasted. 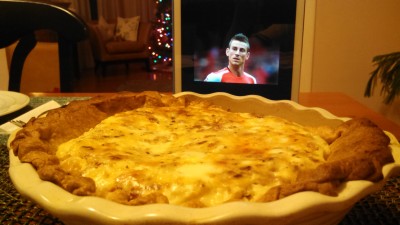 Quiche. Yes, that is a Christmas tree in the background, haters. 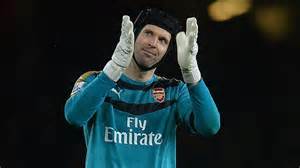 2 thoughts on “And so we feasted.”