In the summer of 1995, I was in the midst of the biggest crisis of my professional life.

I’d relocated from Colorado to Illinois to accept my dream job as an Acquisitions Editor with a small professional publishing company affiliated with a large College textbook publisher. I’d known the company and several of its employees for many years. There is probably not an English major in the world who hasn’t dreamed for at least a few minutes about selecting books to be published and shaping them into something fabulous, and here I was, the plum position having more or less dropped into my lap.

But by the middle of 1995 it was completely clear I had made a giant mistake in taking the job. The week my husband and I watched all of our belongings loaded into a truck, the company announced it was merging with a competitor. To say that the many of the leaders of the competitor companies viewed each other with suspicion and disdain would be a huge understatement. And here I was in the middle of it, a career changer who had been hired by one of the companies during a period in which both had agreed all hiring was to be on hold. The job wasn’t a natural fit for me. Maybe I would have found my way under different conditions, but I wasn’t finding my way under the existing conditions, which could only be described as toxic.

Things were bad, and then they got worse. It was clear that my job was in complete jeopardy and I’d be lucky to walk out by my own free will. It took everything I had in me to to slow down the inevitable while trying simultaneously to right the ship.

Then, suddenly and unexpectedly, a new job appeared that more or less saved me. Not only did it spring me from hell on my own terms, it was a good job where I felt useful and valuable and valued. What I had to give, that company needed. It was mutual. 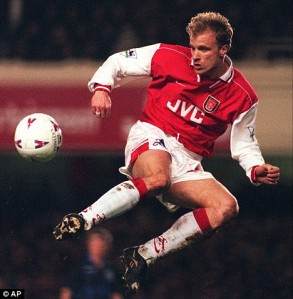 At the same time in 1995 that I was working through my desperately bad situation, a football player named Dennis Bergkamp was being released from a hellish professional situation of his own. Bergkamp had been developed in the famous Ajax Academy, and was considered by many to be a product of Dutch Total Football and his mentors, including the famed Johan Cruyff and Louis Van Gaal. But he was special in his own right. He described himself as a product of his own compulsion to understand the action of the ball under all conditions and control it, perfectly. He worked on ball control every spare moment as a boy.

As a teenager, he was moved into the Ajax first team, occasionally missing school to travel with his professional teammates. But after seven years with the team, he longed to find his own unique path in football. In 1993, about a year before I made my fateful decision to enter the world of publishing, he made the decision to move to Italy’s Inter Milan.

It was a bad move. His style of play couldn’t mesh with the style of his team and he didn’t mesh with his teammates personally, either. Although Inter Milan ostensibly wanted to transition to attacking football, it proved too much change for the well-entrenched, deeply-defensive team. As a result, what the team needed from Dennis, a more or less solo goal scorer, was not in his wheelhouse to deliver. Dennis’s goal production was quartered and his ego didn’t fare too well, either, under the relentless criticism of the Italian press. He survived the situation for two years.

At the same time that his professional life was in a shambles, he developed a fear of flying that he couldn’t, and ultimately decided he wouldn’t try, to shake. His agent sought a new team, specifically one where he would have a better fit and one that would accept his odd condition: he simply would not fly, and any team who wanted him as a player would have to accept this.

Dennis was coming off a stint from which he wasn’t well-positioned for big concessions from a future employer. Perhaps the Arsenal he arrived at in 1995, the Arsenal that would accept his no-fly stipulation, wasn’t on paper the place to expect a commitment to attacking football, either. Boring, boring Arsenal, they were still being called. In reading Dennis’s account of his decision to go to Arsenal, it seemed he’d voted with his feet using logic almost as questionable as his move to Inter Milan.

But underneath it all, Arsenal were on the verge of a huge transition. Buying Dennis Bergkamp was one stroke that contributed hugely. And, at the same time I was being delivered from my own professional hell in 1996, along came the manager who would endeavor to change Arsenal forever. Or at least as long as he was manager, which has turned out to be nigh short of forever, and counting.

There was a good defensive base in place. Tony Adams had captained the team since he was 22 years old, and was just on the verge of commencing a sober life. A few hires later–Patrick Viera, Ashley Cole–and Arsenal won both the League title and the FA Cup. It wasn’t long before Wenger added Freddie Ljungberg, Thierry Henry, Robert Pires, and later, Sol Campbell and Jens Lehman. These players in some combination produced another league title, another FA Cup, and the famous 2003-2004 season in which invincible Arsenal didn’t lose a match.

Arsenal were successful, but perhaps as important to Dennis Bergkamp, he had found himself almost immediately in the type of  system he craved and to which he was uniquely qualified to contribute. He was able to see the possibilities that few others immediately saw and his skill with the ball allowed him to regularly position his skilled teammates where they could produce magic. His ability to find space likewise allowed his teammates to find him with the ball and he began scoring prolifically again. Over time, the system progressively suited his skills, and his skills progressively suited the system. Symbiosis squared.

A few months ago, I shared some snippets from an interview Arsene Wenger completed with L’Equipe Sport & Style. One of the things he said was this:

There is a kind of magic when men unite their energies to express a common idea. That is when sport becomes beautiful. The unhappiness of man comes when he finds himself alone to fight against the problems he must face. Especially in modern society. Team sport has a value, that of being able to be ahead of its time. You can play with eleven players from eleven different countries and offer a collective work.

During his time with the team, Dennis Bergkamp was both beneficiary and technical leader of this collective work.

Bergkamp has been on my mind lately for a few reasons. First, I received his wonderful autobiography Stillness and Speed as a gift for Christmas, which I’ve completely devoured. Also, after the December match against Bournemouth, in which Mesut Ozil produced such a beautiful display, Arsene Wenger compared his play with the play of Bergkamp. He made things happen, saw things no one else saw, opened the field of play in the way no one else could. Not just on the Bournemouth occasion, but repeatedly in his time on the team.

Even evil Jose Mourinho, who managed Ozil at Real Madrid has said of him, “…..Every time he touches the ball, the ball smiles.”

I wasn’t an Arsenal fan while Dennis Bergkamp was on the team, and I couldn’t specifically recall seeing him play with the Dutch National team, but I was deeply curious about how he really compared to Ozil. In the past when I’ve looked at old Arsenal footage, it’s been somewhat shocking to see the lack of beauty that is so much a hallmark of Arsenal’s current play. But I found this footage of Bergkamp, and all I can say is “Wow.”

You can watch it here.

Ozil and Bergkamp, separated at birth by two decades and an international border. Someday someone should splice Bergkamp and Ozil footage together. We may not all be lucky enough to find ourselves in a work environment that feeds our spirits, but at least our spirits would be fed at the moment we beheld this footage.

Meanwhile, the ball would be smiling its head off.

4 thoughts on “Meanwhile, the ball would be smiling its head off”