Our eyes had been telling us for a while. Our hearts knew it as well. But today, Math rendered its verdict, a final one.

As of today, there are only two teams with enough points to challenge for the top position in the 2015-2016 Premier League given the number of points left to be attained.

Neither of these teams is Arsenal.

There was a small–shall we say miniscule?–ray of hope on Thursday following the West Brom match, which Arsenal won 2-0 on goals from Alexis Sanchez. The Thursday match followed a tie from Leicester City over the weekend, but a big win by Tottenham earlier in the week.

Leicester City’s high scorer Jamie Vardy was going to be out today following his red card last weekend, and looks to be out for a few more after some choice words to the referee. The full extent of the suspension is yet to be settled.

A win for Arsenal and a loss or tie for Leicester City today would have kept the door open a teensy smidge. Not big enough for the smallest mouse to squeeze under, it must be said. But an ant, by jove: an ant could do it.

And just what makes that little ant

Think he can move a rubber tree plant?

Anyone knows an ant can’t

But he had high hopes!

He had high hopes!

You get the picture. Stupid ant.

Today Arsenal only managed a scoreless draw against Sunderland (Sunderland!). Meanwhile, Leicester City won big against Swansea, Vardy or no Vardy. They played better without him that they play with him.

Tottenham will play West Brom tomorrow at White Hart Lane. West Brom didn’t put up much of a fight against Arsenal last week. We’ll see what they have this week. 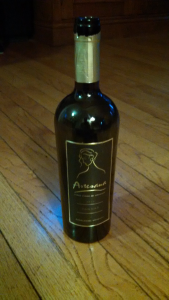 With Math having spoken, I was left with a sad task to be dispatched. I partook of the Ceremony of Gratification Deferred.

I have served a dinner that is the dish of NO country represented by Arsenal players (that would be meatballs!), and poured a glass of wine from Uruguay, a country from which no Arsenal players hail.

And then it was time to reset the countdown to receiving the Premier League trophy that was so lovingly and knowingly set on WholeArsed late last summer.

As of this morning, the countdown on WholeArsed said this: 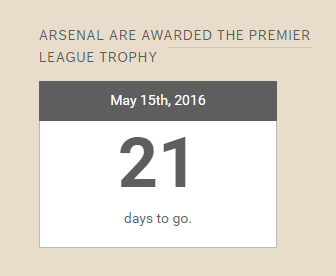 But during the Ceremony of Gratification Deferred, it was reset as follows: 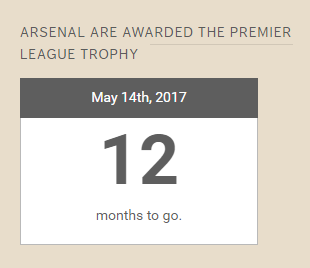 Gratification Deferred was so much more palatable this morning when the unit of measurement was days.

We drink the wine and darken our room, to match the darkness of our very hearts.