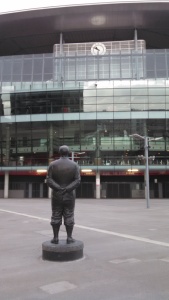 There are four statues on the grounds outside the Emirates. One is the statue of legendary manager Herbert Chapman who I talked about in my post A tale of two managers. His statue is located  outside the South stands, called The Clock End, looking up at a replica of the Clock he had installed at Highbury.

There is also a statue of Dennis Bergkamp, the subject of my post Meanwhile, the ball would be smiling its head off. His statue, showing him collecting the ball high in the air, must be one of the hardest statues in the world to photograph. Or at least the hardest one for me. I tried from every angle and came away dissatisfied. Bergkamp was possibly the best player ever to grace Highbury, so gifted and beloved that my fellow blogger nomaggsrush, a massive Arsenal fan who attended matches at Highbury, told us that he was referred to by the fans, quite simply, as God.

The third statue, near the southeast corner outside the stadium, is of Thierry Henry, the best striker in Arsenal’s history. Like Dennis Bergkamp, he was part of the Invincibles squad that completed the entire 2003-2004 Premier League season having never lost a match.

Also like Bergkamp, he arrived at Highbury on the tail end of a difficult chapter as a player. As a 19-year old, he’d been the high scorer on the French national team that won the 1998 World Cup. What followed had been a period of less distinction, much less, where he struggled in his club team, Monaco, and had been relegated to the Under 21 French National team. He was sold to Juventus, where he survived only six months and failed to produce much of anything.

Arsene Wenger knew of Thierry Henry from his time managing at Monaco, a job from which he was dismissed. Arsene always admired Thierry’s skill but felt that Thierry had been wrongly transitioned to play on the wing. He was convinced that Thierry was a natural striker and when he managed to acquire him through happenstance from Juventus, he set about converting him back to the position he had played as a boy.

Off the field and away from active play, Thierry Henry was anything but smooth. He was an awkward interviewee and self conscious to an extreme. His father had meant well for him, but made his life hard as a child by over-involvement in his development as a player, angering managers and parents of other players by his insistence in his own son’s superiority. Simultaneously, he made life hard for him through his deeply critical private commentary of Thierry’s play.

It was a struggle for Thierry to dance Arsene’s preferred tune as a striker, but the Arsenal fans gave him some room to grow into his new part. About the time normal frustration would have set in, he scored a goal of enormous beauty, buying some minutes from the fans’ notoriously fast internal time clock.

In short order he was regularly producing goals and became a massive fan favorite. He was successfully molded into the puzzle piece that Arsenal needed most and Arsenal fans rewarded him with the love he craved. This post is titled with his own quote about how he came to feel about Arsenal: “Here–I have a contract with my own heart.” He was at home nowhere like he was on the field of play with his Arsenal team mates and at Highbury.

The statue at the Emirates was created in honor of a magical moment in 2003 when Thierry scored an amazing solo goal against Tottenham at White Hart Lane, after which he ran the length of the field to celebrate with the Arsenal fans.  The celebration that inspired the statue is worth watching.

The years following the Invincible season were tough ones for Arsenal. The old guard was moving on and the stadium project was limiting cash available for new players. Thierry hung in for a while, experienced the typical raft of Arsenal injuries, and ultimately left the club for Barcelona in 2007. He moved to the MLS’s New York Red Bulls in 2010. He remained an Arsenal fan and has often been pictured on television in the stands at the Emirates.

The statue was dedicated at the Emirates–with Thierry Henry in attendance and in tears–in 2011.

In a particularly bizarre chapter, Thierry was loaned back to Arsenal from the Red Bulls for two months in 2012 while the MLS was on break and managed to score two goals for Arsenal, one against Leeds and the other against Sunderland. A statue come to life. Those two matches were the only matches in which I saw Thierry Henry play for Arsenal.

I’m in the middle of reading the wonderful biography of Thierry Henry, Lonely at the Top by Phillipe Auclair, the source of much that I learned about our hero.

The fourth statue at the Emirates is Tony Adams, “Mr. Arsenal.” His path was also interesting. However, his autobiography Addicted is out of print and hard to obtain here in the States. I remain ever hopeful of getting my hands on a copy before the season ends.