Nervous as I was to fly, I forgot about the anesthetizing experience of going through Security at the airport. When I’m in the Security line, I understand the truth. I am not a human with human value. Rather, I’m a cow. Sorry, cows, but you just don’t have the same value. I know it for sure when I’m being a cow, at the airport.

Our flight from O’Hare on Saturday evening was delayed by about three hours because of a mechanical problem. I went from being afraid, to being a cow, to being afraid (“Mechanical problems? OMG!”), to being desperate to get on the plane so it could go down already. The flight was mostly uneventful. We slept some, not enough, were stiff and cramped by the time we deplaned. The usual. We arrived at about 10 a.m. local time on Sunday, loaded up our Tube Oyster cards, and took the Piccadilly line as far as we could until we had to switch to the Northern line to get to the stop closest to our Hotel, the Z Shoreditch. I recognized Shoreditch from a very brief trip I took for business several years ago. Having been there before was not very helpful. The roads are not on a grid, lots of circles, and odd angles. Fortunately, my husband is an expert navigator and we got to our hotel with little drama.

We had read that Shoreditch is a hipster neighborhood. Not sure exactly what that means, but it’s somewhat away from the touristy area, is grungy and charming, and peopled by mostly the young. We are not in the hipster demographic by any stretch; ergo we are somewhat visitors from another planet.

The Z Shoreditch was selected online, having two important qualities: 1) It was cheap and 2) it was convenient to the Tube line we needed to take to the match. It also had good reviews. It had one not-so-good feature: it required us to pay both nights in advance, which made me a little uncomfortable.

Our room wasn’t quite ready when we arrived so we hung out on the adorable lounge and I had a latte and croissant. Then we made our way to our room. It is modern, clean, nice, and teensy tiny. It is well made to handle the stuff of two people for a short stay, just. The bathroom in our room is somewhat reminiscent of one we experienced in a hotel in Venice on our honeymoon. There, my overachieving husband announced that it would be possible to toilet, shave, and shower at the same time. In the Z Shoreditch bathroom you would be prevented from such activity by a separating wall between the toileting area and the shower, but the bathroom very much feels as if it is in the room. It is separated only by a frosted glass sliding door. The frosted glass gives the feeling of privacy when you’re in the bath closet, because you can’t see out. From the outside, though, you can see virtually everything that’s going on inside.

It is somewhat a team-building exercise to bathroom here. 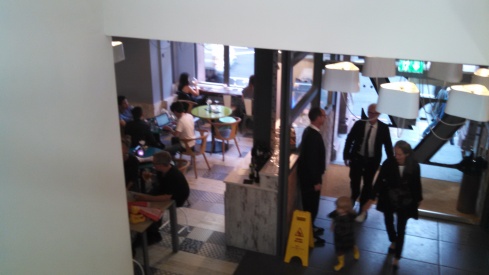 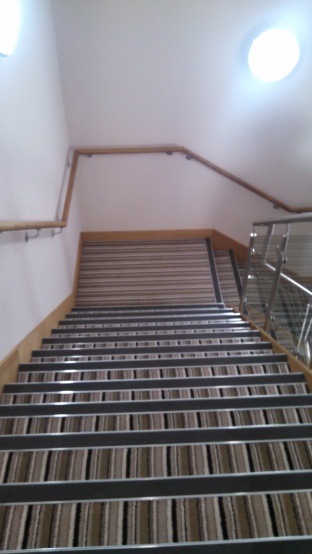 With the delayed flight, we didn’t get over to the Emirates for a tour of the stadium as we had planned because it was too late in the day to spend adequate time before the stadium closed. You can’t tour on a match day, so that will have to wait for another visit. Instead, we visited the Charles Dickens Museum, located in the restored home that he lived in as a young married adult, and in which he completed the Pickwick Papers and wrote Oliver Twist. Very interesting tour for those English majors among us; i.e., both of us. It is interesting from a literary perspective but also an interesting look at life in the 1800s.

For dinner, my husband was craving Indian food, so we were directed to Dishoom by a Z Shoreditch staffer. It was packed and required a 70 minute wait, so we opted instead for the restaurant across the street, Albion Café, focused on British food. Really cute café and bakery. My husband looked long and hard at the menu and with great deliberation. Not because there were so many options he wanted to choose, but because there was very little on the menu that appealed to him. In the end, he chose the fish and chips.  Unfortunately, they were out of fish and chips, so he had to make another selection. After a much longer period, and the delivery to our table of the Albion Wheat Porter and some very good dark and light bread, he selected Braised Brisket Hash with Spinach and Fried Egg. I chose Beef Shin, Stilton & Mushroom Pie. Both dishes were absolutely delicious. We aren’t smart enough or British enough to figure out exactly what was in the hash besides the brisket (must be potatoes?), but it had a wonderful sage flavor. The pie had a flaky puff pastry crust and the filling was flavorful and tender and scrumptious. 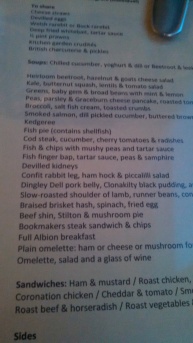 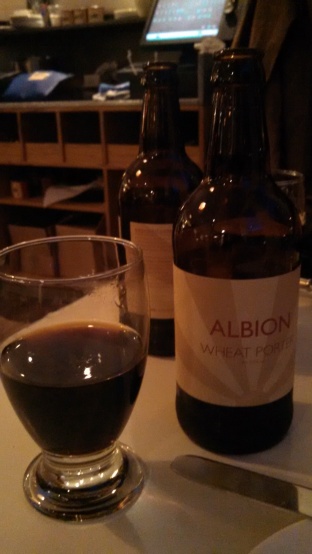 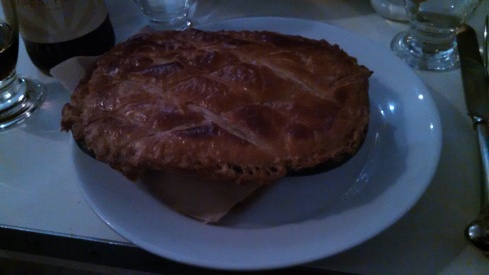 We shared sticky toffee pudding for desert. It was like a dense cake, accompanied by a pitcher of a buttery sweet concoction (I’m guessing this is the sticky toffee) with ice cream on top. Yummy.

We were deeply jetlagged Monday morning and didn’t get out and about until about noon. Had late breakfast at the Hoxton Pastry Union. My husband had a croissant and hot chocolate and I had quiche and a latte. (Quiche was again in a puff pastry crust. Does that ever get old? Can’t imagine it.) They had some interesting breakfast options overall; we came in a bit late for the breakfast menu and had to go for the more breakfasty all-day items available. They also had some beautiful hand pies with some interesting fillings I would love to try sometime. 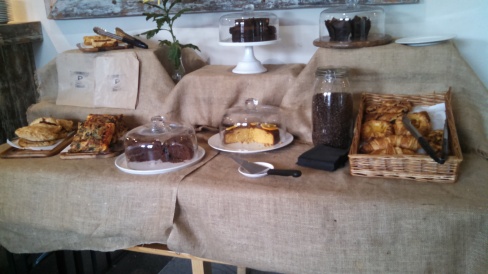 After breakfast/lunch, we took the Tube to visit Shakespeare’s Globe theatre and take the tour. The current Globe theatre is the third Globe, completed in 1997 and spearheaded by American actor and director Sam Wanamaker who was dismayed to come to London and not find a suitable space to commemorate the Bard and celebrate and perform his work. The third Globe is located close to the site of the original Globe, and is intended to mimic the architecture of the original Globe, albeit with modern safety standards. It’s open to the sky, similar to the original, and the seating areas are covered by a thatched roof. When plays are performed, it’s still possible to buy tickets as a “groundling” for £5. While we were touring, a new set for a play was being built; that was interesting to see. Seeing a play at Shakespeare’s Globe is something else we really need to do in one of our visits. Not sure about being a groundling and standing for an entire Shakespeare play, but at that price point, I guess you could leave when your feet got tired.

Interesting stairwell in the gallery

We did manage to get to Dishoom for dinner before the match. Really enjoyed that. Black daal, naan, ruby murray, rice, chai tea, chocolate mousse. 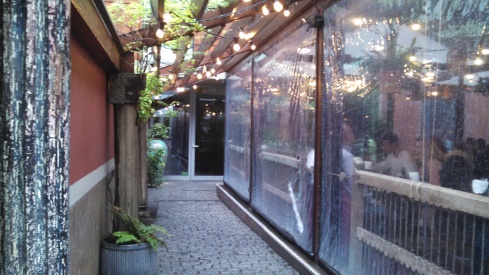 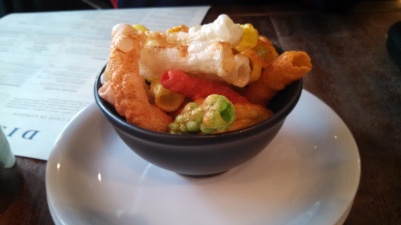 All of this to bide our time before the match. Will tell you about that tomorrow.