Did I mention it’s the international break…AGAIN. What is with this season?

We are forced to entertain ourselves and that can come to no good.

On Monday I covered the extraordinary Arsène Wenger interview in L’Equipe Sport & Style in which he described himself as a facilitator of the beauty in man. I produced a few of the quotes from the interview in my post. In the days that followed, I have tried to inject my own feeble attempts to facilitate beauty, in man and elsewhere.

But that didn’t seem quite enough. I was reminded of a diet someone was telling me about where you add one good habit each day. Could I do more to emulate my hero? I returned to the interview, a treasure trove of inspiration. Remember, this interview appeared in a publication devoted to fashion, so it was fitting that at least some aspect of the conversation focused on appearance. The interviewer noted that Arsène was always impeccable on game day. Arsène responded,

“Because I feel responsible for the image that football has, and the image that I want to give of my club. And also, football is a celebration. And where I come from, we dressed up on Sundays. I loved arriving in England and seeing the managers wearing suits and ties. As if they were saying, ‘Listen lads, our goal is to make a celebration out of this moment.’ I joined in. I want that fan to wake up in the morning and say, Arsenal are playing today, I’m going to have a good time. That guy starts his day off by thinking that something good is going to happen to him.”

It is true, Arsène always looks pulled together on game day. He nearly always wears a suit, a crisp white shirt, a red tie to come out to the field. He may put on a crazy giant parka over the top on a cold day after the festivities begin, but the match starts with Arsène looking like he takes it seriously and is in a mood to celebrate.

In my post, Everything I really need to know I learned from Mourinho, I obtusely called out Jose Mourinho for showing up at this year’s Community Shield with a studied look of slovenliness, as if to prove beyond a doubt that he did not care about the outcome. This was hypocritical on my part, as hypocritical as can be, for I am quite sloppy myself. In no way do I dress as if each day is a celebration. Yes, when something really important is happening–when a client is in the office or I am visiting a client–I trot out a nice jacket. But the exact same suit jacket, time after time.

Almost every other day, I wear jeans. Often not even nice jeans. Occasionally they are decidedly mom jeans. And a selection of sweaters and shirts that is deeply limited in quantity and, especially, quality. The company for which I work has no dress code. I work at the intersection of finance and technology. Financiers tend to be fancy dressers, developers tend to be casual. Although my background is in finance, as soon as I came into the technology fold, I found myself more closely aligned with technologists. Both in how they think and how they dress. Also, let’s face it: neither road of that intersection includes a ton of women to emulate.

Appreciating Wenger’s match day style while being less-than-styling myself makes me not unlike an old acquaintance who told me she started each day with an exercise program on TV. She would light up a cigarette and turn it on, puffing and watching.

So, taking Mourinho as a cautionary tale–can you turn off not caring like a switch, and if not, what then?–I set out on Tuesday to emulate my hero, Arsène Wenger, and treat each day as a celebration.

First I did some mental review. There was a time in my life in which I spent Friday evening watching role models and coaches Stacy and Clinton on TLC’s What Not to Wear. This was the show in which people nominate a friend or colleague who desperately needs help from Stacy and Clinton learning how to dress. The subjects had a variety of wardrobe problems. Too risqué, too thrift shop, too busy, too baggy, too naked, too boring. Stacy and Clinton would appear, uninvited by the hapless subject, show video secretly taped of their bad clothing choices, and then offer them $5,000 to use while shopping to Stacy and Clinton’s rules. The hapless subject would have to bring their wardrobe to NY and have Stacy and Clinton trash it figuratively, and then trash it literally. Every shoe, every belt, every dress, every skirt, every pair of pants, into the garbage. The now-chastened and clothes-less subject would then be told the rules and sent out shopping, first by themselves, then with Stacy and Clinton. They would be have hair and makeup done, have a glorious reveal, go back home where friends and family awaited and cheered their ugly-duckling-to-swan transformation. They almost always found that their new style caused them to be perceived in a different way, including by themselves. They could now take themselves seriously. Stacy and Clinton saved the day.

I don’t watch the show anymore because I have moved on from trashy TV like that.

Just kidding–it’s not on TV anymore. I would watch it, trust me.

So, with the mission of dressing as if each day were a celebration, Wenger-style, I perused my closet, attempting to be as critical as Stacy and Clinton about what objects should be eschewed during this week. My mental Stacy and Clinton said “Go get the trash can and fill it!” But then they admitted, “There really is no $5,000 for you, so maybe you should just make do.”

Now how did it get so bad, this closet of mine? I blame a few things. First, even though I used to dress better, I never, ever was fashionable. I don’t know how to dress and never did. I also blame my mother. She was the one who told me as a teenager, fussing that I didn’t have anything to wear, “Nobody cares what you have on because they are too busy worrying about themselves.” And then I blame what it is to be a middle-aged woman. At some point it becomes obvious: you are invisible. It was gradual, but at some point it was complete. I remember a hilarious lunch I shared with my sister in which we both tried and failed to get the attention of a waiter, any waiter, any host, anyone at the restaurant to take our order. We absolutely could not catch the eye of anyone. Meanwhile, wait staff was buzzing all around the table next to ours, at which were seated four beautiful, young women. We strategized that maybe we could get the attention of those women and get them to place our order.

So, if you don’t know what you’re doing, and no one cares because they are only worried about themselves, and you are invisible anyway, why not be comfortable?

Because it’s a celebration, Amy O. Get your head on straight.

It was a tricky week, because the aforementioned only jacket I wear for every client event was used in last week’s trip to New York and was at the cleaners. The first day I eased into the celebratory plan, only a small celebration, slacks and a blouse, a bit dowdy. My daughter said, “You look nice, Mom.” No other reaction, from anyone, including myself. I did not feel celebratory.

The next day I ramped it up. Jacket, nice pants, heels. I got into the office and docked my laptop, opened all of the applications I use daily to do my work. An application that is used in communicating between team members in Washington D.C. and Chicago had this message while the application was loading: 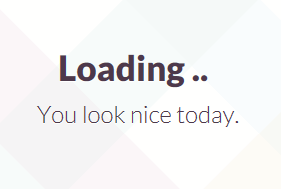 Of course. Anyway, during the day, one person told me they liked my jacket. Another said my shoes were “fancy.”

For the next day I decided to ramp up again, this time into a skirt.

I possess some skirts, none of them recently purchased. I decided to conduct a bit of research to understand what skirt styles are au courant, searching for runway photos from this Fall’s fashion lineups. I came across a photo in which a model was wearing a skirt I perceived as being much like one I owned, years old. I analyzed the blouse that the model was wearing and set about attempting to see if I possessed a blouse with a similar profile. Sure enough, I did, also quite old. I checked her shoes. Here I was a bit challenged by my closet, but found a pair that was pretty close, if you squinted at them.

I tried on the skirt, the blouse, the shoes, never before worn together. It looked great. I looked young, fashionable. Visible. I looked like the super model from my iPad. Except, you know, 40 years older.

Stacy and Clinton stood on my left shoulder exhorting me to wear the fabulous outfit to work. “You look amazing. C’mon. Do it.”

Why not? Why wouldn’t I?

Because there, on my right shoulder, was Arsène Wenger, the guy who involved Stacy and Clinton in the first place. “Do you believe everything you read? I wear le suit de celebration only on match day.  It’s a costume, you crétine, the same thing every time.”

Arsène v. Stacy & Clinton? No contest. I took off the super model outfit and grabbed my jeans and a black sweater.

In the mirror, I looked exactly like myself. I felt like myself. This is my costume. It is a celebration of being comfortable while doing intellectual work that feels somehow physical.

Stacy and Clinton, I do not slam the door on your cause, but I gently close it. For the time being. If and when you reprise your show, my colleagues will be in touch.