It was biting cold as we walked from Economy Parking Lot E to the tram that transported us to O’Hare International Terminal 5. Still, once we arrived at the quite warm Tram station we came across people returning from tropical climes wearing shorts. They were soon to get the surprise of their lives.

We also got a surprise upon checking into British Airways. Our seats were inexplicitly upgraded by the British Airways attendant into International Plus, and we were invited to their lounge to relax before the flight. The lounge was nice, with wine and beer and pop and soda and chips and cheeses and fruit and candy, whatever might suit you. My husband had a sandwich, but the options were so vast, I didn’t settle on anything. I wanted badly to take photos of the lounge, but everyone else there was being so darn cool about it, I had to behave. I did take this picture in the bathroom of all-you-can-use tampons.

The number I could use was zero. I don’t know if that is “alas,” or “hooray.”

International Plus turned out to be the seats just behind First Class. Plenty of legroom, footrests, room to recline without taking out the guy behind you, and better everything than coach–headphones, food, service. They brought us a glass of champagne before we took off. And a menu for dinner in case you were confused about whether the rigatoni was infused with rosemary or thyme. I had the fillet of beef. It was actually delicious.

It was certainly less cramped than our usual seats in Coach, and my 6’2″ husband slept better than he normally does, important because we arrive in the morning London time and need to be able to get through the day.

British Airways lands at Terminal 5 at Heathrow. We had to take a bus from the plane to Border Control with some slaphappy young Brits who’d spent time in Chicago. There was a much longer wait than usual at Border Control, but we were ultimately on our way. I hadn’t slept any better in our better digs on the plane, and I indulged in a few winks on the Tube.

Our hotel for this trip is Shoreditch. We stayed in this area once before, when we came for the Liverpool match in August. To review, this is a neighborhood where many young Londoners live and hang out. It’s well-known for its street art, and it has a dizzying array of restaurants and nightclubs. I said in August that it was peopled by hipsters. However, my husband remarked that he had read that the hipsters had “moved on.” The remnants still looked remarkably hip to me.

The Hoxton, where we are staying, has a lobby that appears to be a popular gathering place all day long. We waded through young people having coffee and conversation when we checked in at about 1 p.m. but it was no less crowded any time we walked through during the day. In the evening, the lobby was transformed into a nightclub, popping with energy and music. There are books everywhere: in the lobby, open bookshelves separate the spaces. The lobby has a loft-like feel, with exposed pipes, long tables, a large fireplace, comfy chairs. So many Apple computers are open, it looks like an Apple commercial.

The Hoxton temporarily came into our budget because there was so much inventory at in London this time of year. I am a bit sad that it may never again do so, because it is quite nice, the nicest hotel that has ever come into budget. Our room is beautiful, modern, and functional, even though it is small. It has a real bathroom, including a shower with elbow room, and a rain head. Places to hang two towels. A small but functional closet. 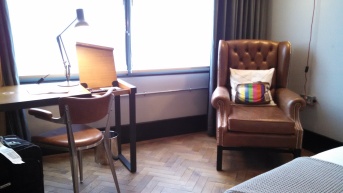 Hoxton lobby early in the morning

When we arrived at our room, a retro-looking radio was playing cool jazz. I needed a nap to be able to get out and about, but I was determined for it to be a short one since so much of the day was gone. I fell asleep with the radio playing, and had weird, hip dreams. I woke up in my hip surroundings, still accompanied by hip music, and  was convinced for a few moments that I, too, was hip. Then I saw myself in the giant round mirror.

We left to find lunch. We had decided on eating at Ruby, but when we got to the address, it had clearly not been open for a while. Instead, we settled on a restaurant next door called Bill’s. Our best guess is that this is a chain, but the chains in London are just so much more fun than the chains around us in Illinois. Bill’s had some interesting cocktails, and I ordered a Bill’s Greens. It was a gin drink with cucumber and mint. Very yummy. And I ordered beef stew braised in beer. It was accompanied by potatoes and a bread stick made out of puff pastry. Although it was a beef dish, it also had bacon on it. Pig and cow never tasted so good together. My husband had the grilled sea bass, which he enjoyed very much. 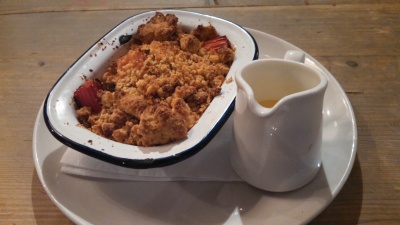 It was late in the day and the only time we’d eaten since a very light breakfast on the plane, so we concluded we should have dessert. I selected the special, rhubarb and orange crumble, with some trepidation. I find the restaurants go overboard on adding sugar to rhubarb dishes. But the rhubarb crumble was perfectly tart, and accompanied by a sweet cream that made it just perfect.

We were full and happy, and with our Oyster cards in hand, ready to hit the Tube and seek out some history.