We didn’t want to ever leave, but at some point the Emirates must be emptied. We walked around the area, back over by the Tollington Arms, which was thronged with fans, passing by the busses containing glum Leicester City fans. We walked a circle over by Holloway tube station, and then back around the Emirates. Kids and parents were lined up by the tunnel to catch a glimpse of the players’ bus coming through following ice baths, and hot tubbing, and massages.

We walked back over to the Arsenal tube station and made our way, through a few tube line changes, back to Gordon’s Wine Bar. Too full again today. We walked around Victoria Embankment Gardens for a while. Then we headed back to the Hoxton.

We were meeting up for dinner with my former boss, now located in London. He had selected the Princess of Shoreditch. It was an excellent choice. Good beer–I had the Camden Gentlemen’s Wit–and the best British restaurant tradition since Tea: Many London pubs serve roast options for Sunday dinner in addition to the normal fare. At the Princess, the options were roast crown of Sussex chicken, roast lamb, or roast sirloin. The roast crown of Sussex chicken was to be divided between two people, and that’s what my husband and I chose. We debated what a “crown” could possibly be. It turned out to be a full chicken breast.

The breast was served in the pan in which it was cooked, seemingly in its own juices that had been augmented with something magical to produce a flavorful broth. Under the chicken were roasted beets, potatoes, kale, onions, carrots, and cabbage. And on top of the chicken were two giant Yorkshire puddings. A Yorkshire pudding is like a popover or puff pancake. These were as big as your head. If your head is on the small side.

That chicken was so good and tender and flavorful I couldn’t stop eating, nor could my husband. Oh, my word how I miss good chicken in this age of genetic modification. (Or maybe I just forgot how to cook it well.) We ate every single piece of meat on those bones, and every object in the pan except for a couple of beets. My husband is not a beet person, and I was saving room for desert, a chocolate financier with caramel sauce, popcorn, and caramel ice cream. A “financier” turned out to be a sliver of cake.

My former boss had the roast sirloin, and made short work of it, too. Both my husband and former boss had sticky toffee pudding for dessert. I scraped a bit of the sauce from the bottom of the bowl. Caramelized yum. 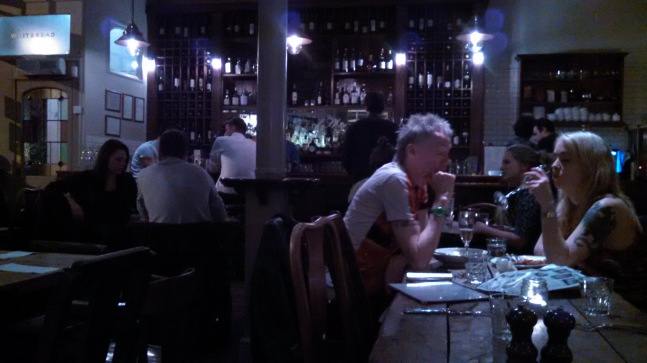 The Princess of Shoreditch 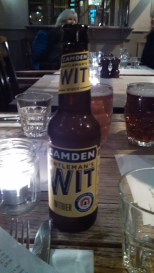 We depend on a lot of help back home when we are on these trips, especially from my sister and her husband, who keep in touch with our kids, squire them around, feed them, sometimes sleep over at our house or give them a bed at their house. They give them overall stability and love. We also depend a lot on our kids to take extra responsibility.

This particular trip involved a big ask from our daughter, a high school senior who had been invited for an interview at one of the colleges she is looking at attending. The invitation to attend the interview came after we had just rebooked our flight for this trip, and we were going to be flying back from London on the same day she was interviewing in Nashville, Tennessee. We sought out help, from my sister to drop her off at O’Hare and from some friends in Nashville to pick her up at the airport and provide a place to sleep to minimize some of our daughter’s stress of traveling alone, to be a friendly face at the end of a journey. We are so grateful for their help and friendship.

But once we got back to the Hoxton after dinner, we heard from our daughter that after being dropped at O’Hare, her flight to Nashville was cancelled. There was a big snow storm in Chicago and many flights were being cancelled or delayed. We made frequent use of Facebook Messenger to stay in touch and offer advice and moral support as she sought out the options by herself. Ultimately, she managed to get on a plane and arrive safely in Nashville. It was past midnight London time when the plane left Chicago and I was greatly relieved that it all worked out. More than that, I was pleased that she had been able to overcome a big obstacle on her own. This wasn’t the first obstacle she faced while we were away. My husband had inadvertently locked her out of her checking account so that her debit card was locked. She figured out how to solve that by herself also.

Travel always brings surprises, some joyous and some trying. I remember a flight I took from Denver to Kentucky when I was little older than my daughter that took multiple detours and more than 17 grueling hours that was my personal travel trial by fire. I think that was the beginning of my uneasiness flying, but it also helped me understand that things aren’t always fully in your hands. It’s a test of your creativity, endurance, and self advocacy to find your way to where you literally need to be. And you always find that there is someone who is willing to help you, but you might have to ask for it.

The joyous, interesting, and enlightening moments make it all worthwhile, but great things come from the trying moments, too.

We were up and about early this morning  on our way back to Chicago. We packed and breakfasted and headed to Old Street station, changing lines at Kings Cross St. Pancras. There were droves of people attempting to board the Piccadilly line at Kings Cross St. Pancras, and my husband was carried off in a crowd of people into the first train that arrived, while I was carried with a different crowd away from the door. There was no way for me to get in and no way for him to get off. I said, “I’ll meet you at the airport!” as the doors closed.

I had no better luck getting on the next one, but when the third train pulled up, a tiny Muslim lady in a headscarf asked me if I wanted to get on. She held back a mass of people while I grabbed my bag and pushed into the train before coming on herself. When she left the train at Hounslow Central we shared a smile.

There was little drama to any of this. A small child could find their way to Heathrow once they managed to get on the Piccadilly line, but it was a nice gesture from a stranger to make my travel day easier. My husband was waiting at Heathrow Terminal 5 when the train pulled in.

We’re on the plane now, heading back to Chicago. My daughter will complete her interview in Nashville and fly back to Chicago today as well. I’m so looking forward to hearing about the awesome part of her adventure after all the work she had to do to have the adventure.

These are absolutely amazing times for travelers. It’s so much easier to do, so much easier to stay connected when you travel. What I fear about the ease is how much the world becomes homogenized as the connections become easier. When you have American soul food fried chicken on waffles in the morning in London, you can see that what is unique can easily be made common. Not to say there isn’t good in that. Shouldn’t we all enjoy the delicious food that the world has to offer?

We must also remember there is good in the special traditions of a culture as well, that can only be experienced locally and live. The treat of roast crown of Sussex chicken and Yorkshire pudding on a Sunday night in Shoreditch more than proves that.