I’m in Denver, Colorado this weekend, enjoying “girls’ weekend,” a roughly annual event in which a group of four women that I worked with long ago in Denver get together. None of us live here now. I was the last to leave Denver, and that was more than 20 years ago. I haven’t been back much, but I dearly love Colorado. What an awesome place to misspend your youth. I wouldn’t mind misspending my non-youth here as well.

Denver has put on a steady show of rain and snow this weekend so we haven’t been able to do any of the fun outdoors things there are to do here. Given better weather, we probably would have gone up into the mountains, but that plan had to be revised. Instead, we made a plan for to drive to Evergreen, a small town in the foothills that we used to frequent, primarily to visit the Little Bear, a local bar.

But there was a match today at 10:30 a.m. local time, and I had to do some scheming to get over to a soccer bar to watch it even though the fellow “girls” have little interest in football. The official Arsenal bar in Denver is The Three Lions, but our lodging was much closer to a bar called The British Bulldog. I figured I’d go over for at least the first half and when “the girls” were ready to head up to Evergreen, they could pick me up.

But some of “the girls” surprised me a little bit by saying they wouldn’t mind heading over to the bar along with me. It shouldn’t really have been much of a surprise, because even though “the girls” don’t enjoy football, I’ve noticed that they do enjoy bars.

The British Bulldog is a cute, old bar on Stout Street. The clientele today were a mostly Arsenal crowd with a few neutrals. Not a large crowd, but a spirited one. We were quickly befriended by Jeff the bartender, who told us a bit about the history of the bar, which had had a liquor license as early as 1904 under a different name (The Punch Bowl) and, naturally, different ownership. Jeff was happy to hear I was an Arsenal fan and shook my hand, then said he couldn’t care less how Arsenal did today: he’s a Tottenham fan. 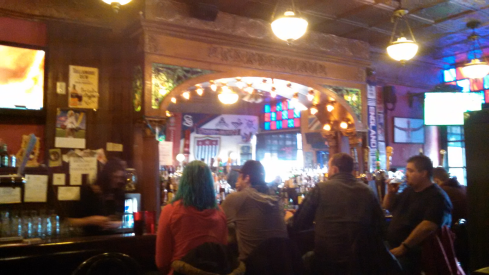 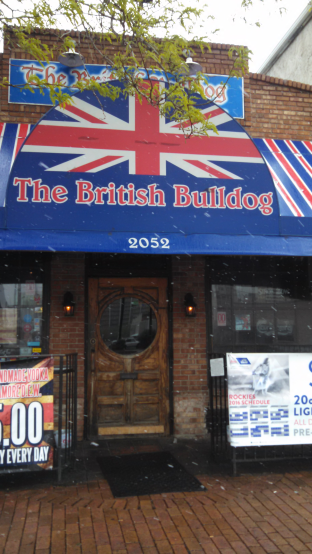 Today during the match a protest was planned, demanding change. Fans stood up in the 12th minute and in the 78th minute, reflecting the 12 years since Arsenal won the Premier League. The implication was clear: these fans want Arsene Wenger out. There was also some counterprotest, supporting Arsene.

Within the bar, I had a conversation with Arsenal fan Mike, a huge supporter of Arsene Wenger (“He is THE man”) who nonetheless had some criticism of some of his choices, including his decision to play Olivier Giroud up front today after a bad many weeks. Giroud was not really getting the job done against Norwich today–no one was really–but Danny Welbeck came in and pretty quickly got on the score board with a sweet shot. The British Bulldog erupted in cheers.

Arsenal held on–barely, there was plenty of tension in The British Bulldog–and came away with a 1-0 win, and three points we need. We move into third again, albeit with the teams beneath us still to play tomorrow. The teams above us, too. But we did the job to be done.

Bartender Jeff came off duty and joined some of our group in a glass of scotch. Bartender Jeff: honorary “one of the girls.” His team is up to the plate Monday.

Bartender Jeff, we love you man, but wishes for a tie or a loss are coming your way.