Our last trip to London has begun at last. Somehow, it sneaked up on us, and in no way was I prepared. Between being behind at work and the end of the school year–always a busy time– and a trip for work that will have to begin the very day we return to Chicago from London, and a late change in Prom plans, it seemed like there were far more things to do than minutes to do them.

Still, with the help of family, it seems we got things pulled together. Security at O’Hare was a madhouse, but at the gate it seemed completely empty and tame. Not sure where those people ended up. Maybe they are still in Security.

Our flight was the latest of any we’ve taken to London, leaving Chicago at 10:40 p.m. and arriving in London at 12:30 p.m. We both slept better than usual, although I used Z-quil. My husband will argue this point, but I say he slept so well that he snored in the night. I got quite a bit of sleep on the Tube on our way from the airport to Tower Hill. By the time we got through the Border and to our hotel, it was already 3 p.m.

Our hotel, the Apex City of London, is in roughly the same neighborhood we stayed in October. This hotel is closest to the Tower Hill tube stop, right across from the Tower of London. It’s quite a bit closer to tourist destinations, kind of fun for our last trip. The hotel is located in Seething Lane. Something about the name “Seething Lane” makes me smile. “Seething” seems so angry and “Lane” sounds so sweet. A bit passive aggressive, eh? But the hotel is nice. Our room is small but well laid-out, with a small closet, a large desk, and a bathroom with a separate bath tub and shower. My husband and I will be able to co-exist in the morning. 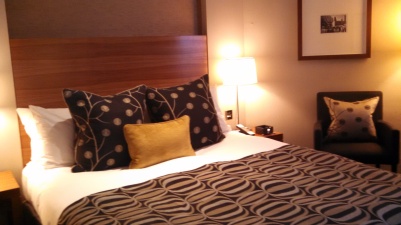 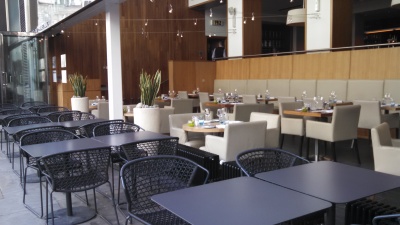 With our short time available for touring today, we decided to do something I’ve wanted to do since our first visit as a family in 2012 that just hasn’t worked out on any of our trips. I wanted to take in Evensong or Vespers at Westminster Cathedral. We had sufficient time to shower and get over to the Cathedral, stopping for coffee and hot chocolate to hold us over until dinner.

The service today at 5 p.m. turned out to be Vespers.

The Office of Vespers, the traditional Evening Prayer of the Church, offers to God our praise for the day that is ending, and in the words of the Canticle of Mary, ‘glorifies the Lord’ for His goodness to us.

I had mistakingly believed that the Vespers were at Westminster Abbey, so we went there first. The stewards directed us to the Cathedral, a 10-minute walk down the road. We were following a man escorting 5 boys dressed in a distinctive blazer in the same direction, figuring they might be part of the choir. Indeed it seems they were, or at least they were attending Vespers and thus were helpful to follow up the road.

The Vespers service today was focused on the Virgin Mary. It was lovely, absolutely soaring, gorgeous, vocal music sung in Latin by the boys’ and men’s choirs. The program had both the Latin words that were sung and English translations so you could follow along. The service took about 45 minutes.

Because it was a church service, I felt I couldn’t actively take photos, but here are a few no-look photos of this gorgeous cathedral. Very worthwhile–if you love beautiful music even if you’re not so sure about sacred music, I highly recommend attending Vespers or Evensong at Westminster Cathedral.

We went to dinner near our hotel at a pub called Hung, Drawn, and Quartered, which specializes in pie. I had a pie sampler, three mini pies with beer pairings. My husband had fish and chips (and my pie leftovers). Alas, the kitchen closed early so I couldn’t sample the English Strawberries I had my eye on.

We went back to the hotel where we watched the second half of the Promotion Playoff Semi-final between Sheffield Wednesday and Brighton while drifting off.

Praise for the day that is ending, times two.