This is my last official post for WholeArsed, the blog I started nearly a year ago as I was given this opportunity to regularly attend matches for my favorite team, Arsenal, live at the Emirates in London.

I have so many people to thank for making this year possible. Please visit my page, Many Thanks.

I started the season with high hopes: this was certainly a season in which Arsenal fans anticipated making a real go for the Premier League title. No one could have anticipated the abject collapse of last season’s winners, Chelsea. Likewise, one one could have anticipated the way Leicester City and Tottenham embraced the void left in the wake of Chelsea’s fall and the weak performances of perennial contenders Manchester City, Manchester United, even Liverpool. That Leicester City and Tottenham were able to capitalize and Arsenal was not was a sore point….until Tottenham hilariously capitulated second place on the last day of the season.

It should have been Arsenal’s year, no doubt about it. Not only because this season presented the best opportunity for a team of Arsenal’s quality to rise to the top of a weak field, but because it is my one and only year to have this opportunity to go regularly to the matches. Wouldn’t that have been the most amazing plot line in the world to have been live witness to our return to the throne?

It turns out that the plot line is not each of ours to make. Our hopes and dreams are not fulfilled at our choosing. They may be fulfilled, just not on our timelines. They may not be fulfilled, ever.

I’m sad we didn’t win it, and my heart absolutely broke over the ugliness that ensued among the fan base, deeply disappointed that we didn’t get the job done again this year. I can’t control that, either.

At the same time,

I had a friend say, “It must have ruined your year that Arsenal didn’t win.” To this I have only one thing to say: I had an absolutely glorious year.

Would it have been more fun to win? Yes, I must admit that it would have. But has this year been the most fun I’ve ever had? Yes. By such a long shot, it’s ridiculous.

And in some ways, the last match produced the most fitting, quintessentially Arsenal conclusion.

I told the story in my post To every thing there is a season of how my father was dressed, after he passed away, in the T-shirt of his grandson’s baseball team, the Danville Mustangs. When my father understood that he was dying, he accepted it. He’d lived a long, productive, good life and he knew it. But he did have a regret that he expressed. He’d looked forward for a long time, many years while the team raised funds, to seeing his grandson play at Cooperstown Baseball World tournament. Cooperstown, NY, is the home of the Baseball Hall of Fame. It was to take place in the summer. It was clear by the end of January that he had just a few days more to live. He knew he wouldn’t make it to Cooperstown.

There are so many things we humans get caught up in. A game at Cooperstown for a team of 12-year olds, sport, writing, art, gardening, quilting, trains, travel, politics, home decorating, cooking, music. Shopping. What is the point of all these things, so minor in the scheme of things? I’ve thought about this a lot in the year that has gone by. Why are we grabbed by them?

It’s said that life is short and indeed it is. But life is also long. So very long. A life without distraction, without passion, even for something that may strike some of us as minor is no life at all.

We humans don’t live forever, but what does? Well, it’s baseball and writing and art and gardening and quilting and transportation and travel and politics and home decorating and cooking and music. It’s shopping, by George.

I have to guess it is the latter. You leave without completeness in your human ambitions. You leave something for your decendants to finish for you. My brother made sure that some part of my Dad made it to Cooperstown. Not only by scattering his ashes, but in shepherding in his son the same love for the sport that my father also held. He took his son to Cooperstown just as my father had taken him.

Something amazing will come for the team I love, Arsenal. It may not be next season, or the one after that. It may be under Arsene Wenger, or not. But it will happen. And while it is happening, I will be supporting The Arsenal, the team that I love. We have unfinished business to attend to.

As far as I can tell, there is also much road to travel before my human end. My business is not finished, far from it. I had the time of my life this year traveling to see Arsenal and writing about it. It’s been a fabulous hurrah, but it is not my last hurrah. What comes next, I don’t know. But something amazing will come next. I’m sure of it. 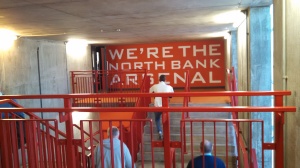 Although I’m certainly well beyond the first half of my life (do people live to be 112?) I’ve decided to think of this time in my life as the start of the second half. The second half at the Emirates has Arsenal shooting toward the North end where my seats were this season. That’s the goal into which Danny Welbeck placed that last-minute header against Leicester City on Valentine’s Day, and where Olivier Giroud scored his second and third goals on that crazy last day of the season and where Mikel Arteta later bounced one in off the Aston Villa keeper in added time. When your team is predominantly a second half team, that goal always presents the greatest opportunities.

I came to get down

I came to get down

So get out of your seats and jump around

That is how I am starting my second half as well.

May you also start the second half with hope in your hearts, and may your match end with unfinished business.

The players have taken the field. The second half will kick off in seconds. Jump around!