It must be true that no one gets to the end of a year without seeing change, both in themselves and around them. As I look back over this past season, there has definitely been some evolution.

Hair Dyeing Redux. In Hairesy, I wrote about how, as young children, my kids had insisted that I keep dyeing my hair, even to the point of turning down a revenue share if I stopped dyeing when it was offered to them.

When both kids, as teenagers, read that post in the pre-season, their reaction was identical: “Is that deal still available?”

As the situation now stands, it appears I am dyeing my hair only for myself.

HGTV.  I wrote in I’ve moved on, Drew and Jonathan that I had given up The Property Brothers. That really didn’t last long. I sneaked back to them (and to Jojo and Chip and to David and Hilary) like a scurvy dog before the season was over.

Naked Babies in the Grass. In my post Gooner Supper Club, I kicked off a concept that later became the The Gooner Triumphal Feast because my husband can’t abide the word “supper.” My husband might say that was the first time I intentionally stopped annoying him.

What I discovered through the Feast, more than the fact that the Dutch dish Naakte kindertjes in het gras would be more palatable if it were a little less Aryan, is that I love lentils much more than my family does. I also discovered that it’s not easy to name a man of a match from your team after your team loses or to find consensus when your team wins. Every man to himself!

Fear of Flying. I wrote on several occasions about my overall dread of flying. After a year in which I flew so much that I earned enough miles on American Airlines for Gold status and a free trip to London in May, I found myself feeling quite meh on my last flight. Calm, cool. Collected? Not so much.

No way Jose. My nemesis Chelsea manager Jose Mourinho had a nightmare of a season and in December was fired, sacked, shown the door. It hit him in the proverbial backside on the way out.

He seems to have been hired at Manchester United, maybe this very day.

Our oysters were kept to themselves. The unfortunate announcement that was made on multiple of our visits through the Arsenal tube station was discontinued at last. A win for Oyster purists.

Lanesra lost her grip on the FA Cup. The third year of Lanesra’s life was not a charm, at least if we had the chronology right in Lanesra keeps the schtick party going. No FA Cup for Arsenal or for Lanesra this year. Perhaps the Community Shield was really her game.

Daffodils finally stopped blooming. Although we saw them in London in December, in February, and in March, there was no sign of them in May. 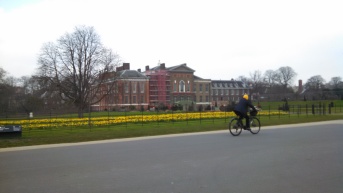 THE shoes were retired. I went everywhere with them they carried me all over London. In the end, they had to be replaced. I’m warming up to the new shoes. It feels a bit like an arranged relationship.

The runt finally won. I drew Leicester City in the draft where matches were selected and, believe me, at the time it was in no way exciting. Remember, last year, they were nearly relegated. No one coveted my tickets. By the time that match came around in February, it was clear that, between seeing them and Manchester City, I’d probably seen the eventual League Champions play at the Emirates. (Naturally, I was hoping that the champion I saw was Arsenal.) That Leicester match was probably the most thrilling of the season.

That crazy business on the last day with with Tottenham, who was not even playing in the same stadium, was awfully close. A wry thrill, and somehow fitting.

Leicester walked away with the trophy, well before the last day of the season.

But there were some things that did not change.

I still love Arsene Wenger and my Arsenal, despite all. I don’t think that will ever change.

I still miss my Dad. That will never change, either.

About Abou. Abou Diaby, the subject of my post Moment of silence for Abou Diaby, who was released from Arsenal last summer following much promise but an overwhelming number and duration of injuries, landed at Marseille. There he experienced more injuries and only managed to play in four matches.

Nacho Monreal Puns. Even though we tried hard, the season ended without our ever uncovering any Nacho Monreal puns. A humbling season for creativity.

Arsenal arms, empty of the Premier league trophy.  Remember, the goal for the season was to win it. Another season with someone else’s cabinet holding the silverware.

I’ll be back in a few days with my last post.