Very weird travels this time. Many times I’ve experienced the stress of checking in because I’ve been late to the airport, then had to stand in long long lines through security, sweating it out, unsure whether I’d make the plane. If that was a trip to London, it was invariably followed on the other side by long, long lines through the Border.

But this time, we had stress of a different order. At O’Hare, Security pushed and cajoled us through at top speed. There were no lines and we couldn’t go fast enough to suit them. Then in London, there were no lines at the Border and, again, we were processed as if there was a fire behind us. As a result, we got to our hotel on West India Quay quite early.

I have invited my mother to travel with us when we come in April because we’ll be in London longer than usual. She has never been to London and that has caused me to think a lot about what locations and hotels would produce the best London tourist experience, having now stayed in nearly 15 different hotels and locations. What is clear to me is that the hotel and location we selected for this October trip to London isn’t the right one for the April trip if Mom comes along. It is far from the airport and doesn’t really much feel like you are even in London.

I picked it for two reasons. It was very cheap although supposedly a 5-star hotel AND it was the very hotel of the Bad Lasagna experience of Tottenham Hotspur that I wrote about in Dogs win, cats eat bad lasaga, part 1.

As I thought about the best way to will good vibes to my team, Arsenal, it seemed the right way was to stay at the Marriott West India Quay, and survive. If there was lasagna to be eaten to tempt fate and come out the winner, so much the better.

It turned out there was no lasagna on the hotel restaurant’s menu, and we never did eat there anyway. After we arrived, instead we walked around Canary Wharf and had lunch at The Tea Merchant. A roasted Jerusalem artichoke risotto had caught my husband’s eye on the menu posted at the door, and nothing else we saw as we walked around West India Quay had displaced that image. Unfortunately, once we were seated at the Tea Merchant, no Roasted Jerusalem artichoke risotto was available. He had the roasted sole and I had smoked haddock with a poached egg and hollandaise sauce. It looks pretty disgusting there, eh? But it was quite yummy. It’s really hard to go wrong with hollandaise sauce, I find. Put it in on an old shoe and eat it. You’ll be happy. 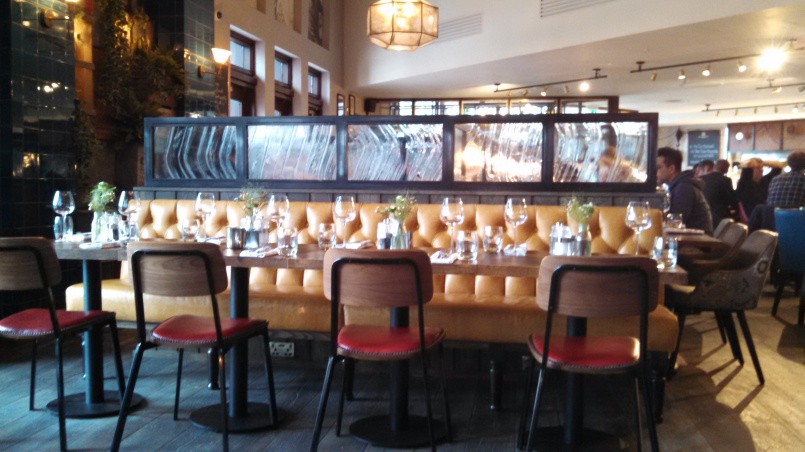 My husband and I debated what to do with our afternoon. In the end, we were drawn to the art and letters exhibit at the Reading Prison. Interesting choice because, as I mentioned in my post covering our last trip, art is not our thing. We had to take the train to Reading, a 20-minute journey if you happen to get the Express train.

What was it like traveling outside of London? I have no idea, as I promptly fell asleep before the train even left Paddington station.

We got off at Reading station and walked over to the prison, having been given directions by two friendly Bobbies. We walked past a statue of King Edward, past the very lovely, lion-guarded Forbury Gardens, past a church with awesome tombstones, like from a gothic horror movie. 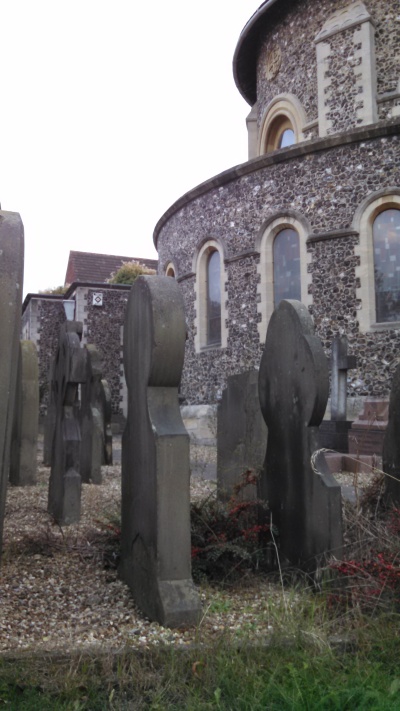 The Victorian era-built prison was closed as a prison three years ago, but was still adorned with razor wire. It was a dark day Friday, and it could not have had a darker feel outside. Inside, it just felt sad.

Its most famous prisoner, writer Oscar Wilde, had resided there for two years after being convicted of “acts of gross indecency with other male persons.” At the time of his conviction, progressive thought held that the best way to rehabilitate prisoners was for them to live alone in a cell and come out only for exercise for one hour a day, or to chapel. But even in those instances, prisoners were equipped with large hoods and weren’t able to see each other.

While Oscar Wilde was in prison, he penned his famous letter, De Profundus, which contained the words:

Outside the day may be blue and gold, but the light that creeps down through the thickly-muffled glass of the small iron-barred window beneath which one sits is gray and niggard. It is always twilight in one’s cell, as it is always midnight in one’s heart.

He died only three years after he left prison in self-imposed exile in France. His work, meanwhile, experienced new life and interest, in a way that hasn’t really abated.

The art was displayed mostly in the cells themselves, usually only one piece per cell. The art reflected themes of separation, confinement, and gay persecution. There were films, letters, photos, portraits, sculptures, mixed media. The prison setting was extremely effective, a work of art in its own right. 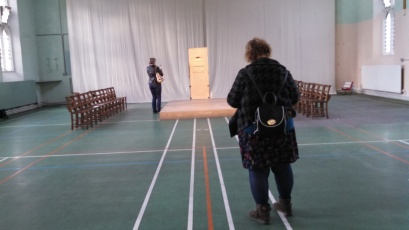 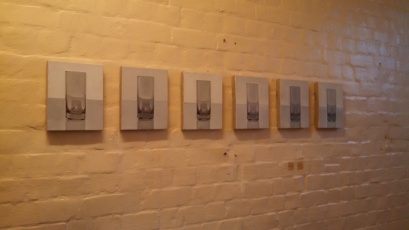 You could sense the torment and loneliness, and in the case of Oscar Wilde and others, the unfairness. You couldn’t help but project yourself into that helpless and dire situation as you stood in the cells, in the chapel, in the yard. And you couldn’t help but recognize the figurative prisons of your own life.

Er, my own life. (Yours is probably carefree!) For once I felt I understood the art. A very worthwhile day; I recommend the exhibit highly. 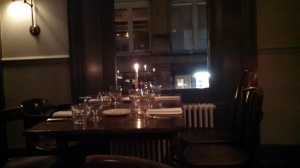 Introspection isn’t the point of our travels, my friends, so we hightailed it back to London to see if we could find any of my London colleagues at the Angel. I hadn’t been in touch with anyone during the week, was just too busy. We didn’t find anyone there, so we wandered over to the Princess of Shoreditch for dinner. The Princess is, to date, one of my favorite places for Sunday roast, but this was a Friday. I had the hanger steak with a Cabernet and my husband had free range chicken pie with a Camden Hells lager. Delicious.

A comfy bed in Canary Wharf awaited, but not for long.

2 thoughts on “Outside the day may be blue and gold”