We had been to the Emirates once before, described in my posts Premier league schedule will be announced tomorrow and The times they are a-changing. That time, we were clearly making a pilgrimage. In contrast with our temporary London living situation in which we found ourselves strangers in a strange land, described in my post Amongst the hipsters, when we attended the Liverpool match at the Emirates on Monday we could not have been more at home.

The game was at 8 p.m. local time. Our dinner at Dishoom was a bit leisurely, so we had to hoof it back to the hotel, grab our tickets and race to the Old Street Tube entrance. We took the Northern line to Kings Cross St. Pancras to access the Piccadilly line that would take us to the Arsenal station.

That’s where things got more interesting. The train was three minutes from arriving, and potential riders—some were still business folk returning home, but most were Arsenal fans—were standing 4-5 rows deep to access the next train. It seemed likely several trains might come and go without being able to make our way on. When the next train came into the station it was already jam packed with people, but the door opened near us and we were carried in a stream of people toward the door. My husband made it on and I forced my way on as well. (Next time, we’ll have to make a separation plan for where we’ll meet at the match if we aren’t able to make it on the same train.) There was not an inch of space for another passenger and I wasn’t even sure my husband’s head was situated where it wouldn’t be removed when the doors closed. Just then three more fans shoved their way onto the train behind me and the crowd let out a groan when the shocks from the shove reverberated through the car. At that moment, I understood the exacting definition of the term full capacity.

Fortunately, it was a short ride to Arsenal station with only two stops, and few people coming or going, and so my nose was only a ¼ inch from my fellow passenger’s armpit and my arms pinned to my sides for only a few minutes. After the immediate aftermath of the pushing onto the train incident, the fans were remarkably cheerful being crushed into one another sardine style.

We were freed when the doors opened at Arsenal station and walked up the long tunnel out to the street leading to the Emirates. I love that walk. You are walking from Hades into Heaven. Everyone is laughing, talking, singing. The street is lined with product, food, beer stands.

Before you walk over the bridge to the outer circle of the stadium, you can visit the club shop which, naturally, we did. The club shop was humming. Arsenal merchandise of all stripes was flying off the shelves. Shirts, socks, jackets, balls, mugs, calendars. Infants to giants, all served. My husband was looking for a particular jacket that Steve Bould, Arsene Wenger’s trusty sidekick, was wearing in one of the away matches. That one happens not to be available yet. We left the club shop, two of few fans in the shop leaving empty handed. I’m confident the shop will one day be successful in prying cash from our eager hands.

Then over the bridge to the outer circle of the stadium. Fans everywhere, taking pictures, looking at the exhibits, statues, photos devoted to the team and the history of the club. I wanted to be inside the stadium for the warmup, so we didn’t spend much time outside. We found our seats, almost directly opposite of where they had been the last time we were at the Emirates, somewhat behind the goal off of the right arm of the goal keeper who faces the Clock End. High enough up to see the play forming but low enough to recognize the players–mostly because the way each of them run is so familiar to me.

The game was a goalless draw, but a highly entertaining and exciting one. Arsenal’s best central defensive pairing of Koscielny and Mertesacker was unavailable through injury and illness, respectively, so Calum Chambers and Gabriel had a go of it. They aren’t as solid overall and there were many midfield mistakes which also produced some nightmare scenarios that got some Liverpool shots rattling off the goalpost and/or being saved by Petr Cech. Through Aaron Ramsey, Arsenal scored a goal that was wrongly adjudged offside. In the second half, Arsenal came very, very, very close to scoring on several occasions.

The last time we attended a match at the Emirates, we were seated in a section specifically for visitors. My impression was that the atmosphere was magical, even more magical as Arsenal pulled out a 7-3 win. However, that experience couldn’t begin to compare with being seated among the diehard Arsenal fans even in a match that ended with a goalless draw. Nearly 60,000 fans singing, shouting, moaning, groaning, cheering—as my husband pointed out—as a single organism. Remember I wrote in my post And in my stocking a giant lump of coal that my husband had said that listening to me watch a match was like listening to someone being repeatedly punched in the gut? Except for the few hundred Liverpool fans, virtually every person in the stadium was emitting the identical being-punched-in-the-gut sounds as I was. We shrieked at the same time, in pain and in pleasure. We sang in one voice. We clapped. When a Liverpool substitution was made to replace Firmino with the more obscure Ibe, I turned to my husband and said “Who?” (as in “who the heck is that?”) at the same time that 40,000 other voices were also saying, “Who?” Ok, maybe they do that every time. But I had never before noticed or done it, and here I was doing it. I did what everyone else was doing, not because they were doing it, but because it was the thing to do when you live and breathe what is happening on the field. It was instinct kicking in, in a most natural way. We were completely at home in that crowd. 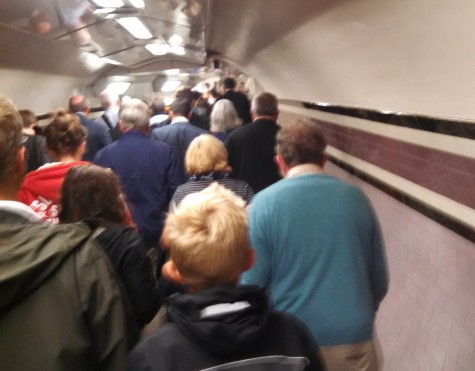 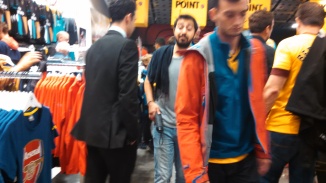 Brisk business in the club shop 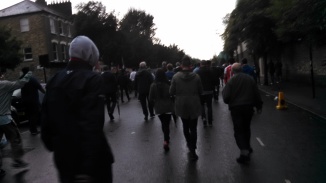 Street leading up to the Emirates 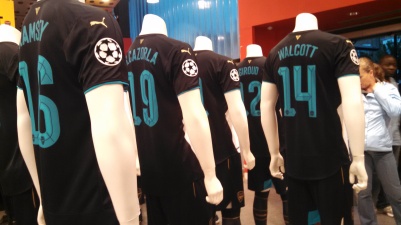 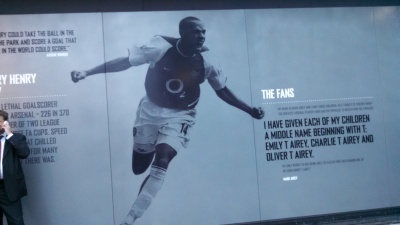 Thierry Henry on the stadium wall 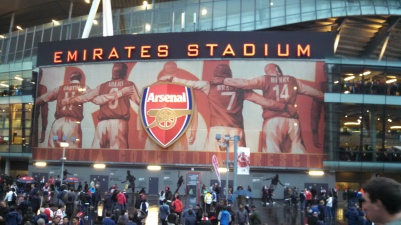 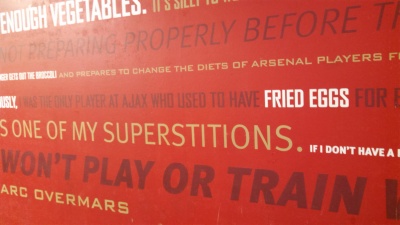 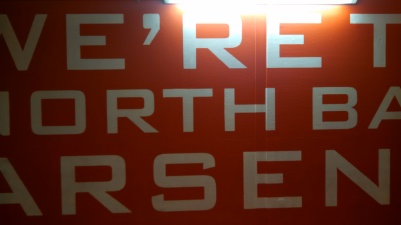 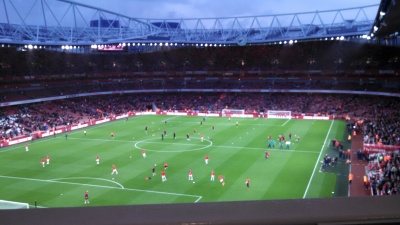 There were not too many women at the match, based on my failproof method of measuring women. Ladies, have you ever used the restroom at intermission at the theater? The line is so long that, in Chicago, it’s someone’s actual job to keep the bathroom queue moving at top pace. I didn’t want to miss a minute of the match, so I figured I’d wait until the first half whistle blew and go stand in the bathroom line. If the game was in danger of starting before I returned, I’d go back to my seat and hold it for the 45 minutes + added time until the match was over. But when I got to the bathroom, not only was there no line, there were at least 14 stalls open. Even by the time I left the bathroom there was a line of only one woman. I felt sorry for the guys as I walked back to my seat. Their bathroom line was well down the hallway. Turnabout at last!

When the final whistle blew we trotted out as quickly as possible, out of the stadium, over the bridge, down the street to the Arsenal station, where we quite quickly got on a train that was waiting with doors open, comfortably crowded. Within 15 minutes, we were walking through the door of our hotel.

We got up in the morning, had a delicious, simple breakfast at a funny space called the Coffice, realized that we’d made a miscalculation on how much time we had to get to the airport, dealt with a serious Tube back-up, a crazy taxi drive, and a baggage check-in line that was so discouraging we’d started to deliberate on who would take the scheduled flight with no bags and who would come on a later flight with bags. Suddenly, the American Airlines angel of mercy appeared and whisked us to the front of the line. We then raced through Security and through every gate of a very long terminal to arrive breathless at the designated gate. We were loaded on the plane and made our way back to Chicago. I watched two bad movies and slept quite a bit. Went through customs, found our car, drove home to a well-functioning household and two kids who showed their independence and maturity through a long weekend and the start of a new school year with some Auntly help. Had family-favorite dinner of mostaccioli and prosciutto.

It was like it never happened and, at the same time, like it HAPPENED in bold, italic, capital letters.

Will it ever get old making massive arrangements to be away from home, printing out tickets, taking a seven-hour flight, spending two nights in a hotel for the purpose of seeing one match, and taking another seven-hour flight back?

It’s hard to imagine that it will.

What I fear is that it will become addictive.

3 thoughts on “An evening with my people”