When we got to the stadium, all I felt was calm. This didn’t seem like a good thing. Calm is never a feeling I have before a match, especially at the Emirates. I wondered if I was becoming jaded by the experience of being there, or if it was because I had my son with me and being responsible for his well-being was taking the edge off somehow.

We’d had a good day. In the morning after breakfast we took the tube to Stratford to the Queen Elizabeth Olympic Park and walked around. We saw the aquatic park, the stadium, the river. We spent a while at the Lee Valley velo park, watching some kids doing racing training. We walked along the path all the way to Leyton, past Leyton Orient FC. The path goes along the river and then past the BMX course and a mountain biking path. My son was again in charge of the route. I was sure we were lost, but my son was confident of reaching Leyton, as we ultimately did. 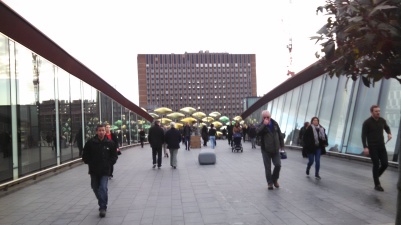 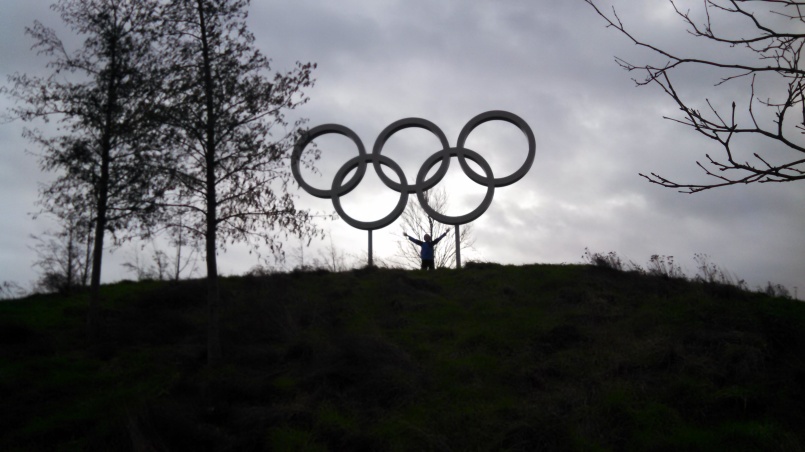 We went back toward Westminster for lunch, finding Cafe Fresca, a cute and divey restaurant. I had a bacon sandwich and my son had penne arrabbiata. 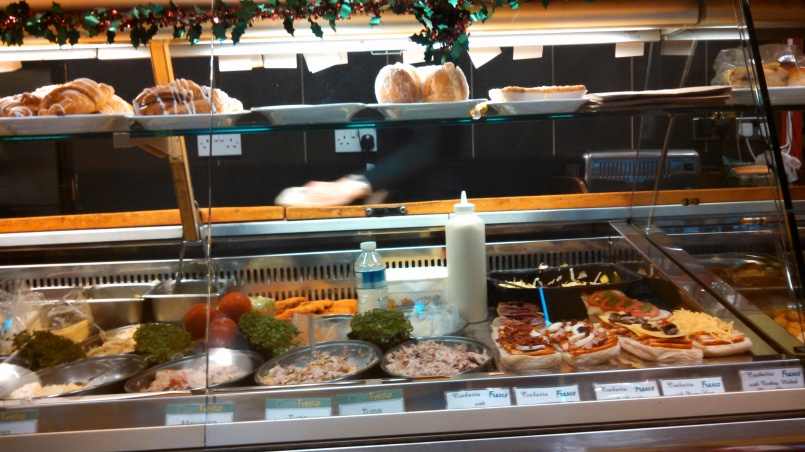 We went back to the Arosfa and had a nap, called home, and went out for a delicious pizza dinner at Pizza Express, also a chain.

It was time to head over to the stadium. We accessed the Piccadilly line that goes to the Arsenal stop from Leicester Square. Unlike other times we travelled to a match, the train was quite empty, although there were a great many people exiting the station as we were and walking up the stairs and over the bridge to the Emirates. A couple of well-lubricated Man City fans were singing a song oddly about their inferiority complex relative to Manchester United, which seemed somewhat misplaced heading into Arsenal’s stadium. Arsenal’s supporters cheerfully tolerated them.

Security was tight for the match, much more than usual. I was thoroughly frisked before entering, my son somewhat less so. The stands were quite empty when we arrived. We watched the Arsenal players warm up. In shooting practice, nobody seemed to be able to hit the target. It seemed like there were still quite a few empty seats by match time. The four seats to the left and right of our seats were empty until at least five minutes into the match.

I wasn’t alone in my lack of nerves. It seemed the entire stadium was in a mellow mood. There was lots of singing and it took a while before some bad referee calls (noncalls, really) got our collective blood boiling.

There is one fellow who sits somewhere behind us who seems to be somewhat out of sync with the rest of the crowd. I don’t know which guy he is, but he has a very distinctive, high-pitched voice. He shares his thoughts freely. When the crowd is mellow, he is either quite a bit more mellow in his commentary or quite a bit more keyed up. When we’re jumping on the referee’s back, he’s either six times more incensed than everyone else or is the only one who sees the reason the referee was absolutely correct. When something goes wrong on the field and we’re moaning about Thing A that happened, he is moaning about Thing B, or cheering Thing C. With whom he is sharing his thoughts and what that person is thinking I don’t know. That person’s voice can’t be heard from my seat.

The crowd and I were mellow at 0-0. Except for celebrating Arsenal’s goal thanks to a beautiful shot from Theo Walcott we stayed mellow after 1-0. I was treated live for the first time to the famous song  “One nil to the Arsenal”  although we’ve been up 1-0 nearly every match I’ve attended this season. But when we got to 2-0 after Olivier Giroud put one through Joe Hart’s legs, all of the sudden I was ridiculously nervous. It had clearly spread through the entire crowd.

We were a bundle of nerves for the second half, and especially after Man City managed to score with about 10 minutes left to play. Man City had a couple of other chances that had us gasping. In one play, Laurent Koscielny tackled a dangerous ball away, producing a sigh of relief from the entire stadium. But our slightly out-of-sync compatriot had a different reaction: “Laurent Koscielny, you’re an effing god!” he cried, pronouncing Koscielny’s name in a perfect French accent. And not pronouncing “effing” as “effing.”

After 4 excruciating extra minutes, we at last were rewarded with the whistle that ended the match, and so we escaped with three points on our minds on the 8-hour flight, and not the depressing 0 points we feared.

Arsenal stay in second place in the Premier League behind Leicester City who managed another win over the weekend. They have two points more than Arsenal. At this point in the season, each team has played every other team in the league except two. Whether a team will be able to pull away remains to be seen, but it certainly appears that we’ll see more of the same in the second half of the season. Tight, tight, tight.