The match wasn’t exactly David v. Goliath. There is little question that Barcelona are the best team in the world, so it is true that they are Goliath. But Arsenal are within the top 10-20 teams in the world. So, we’re like David as a grown-up, rather than a shepherd boy, maybe with a couple of somewhat wimpy friends.

I don’t think we seriously believed that Arsenal could beat Barcelona, but stranger things have happened. We held some hope. At the same time, we understood that certain care must be taken to produce the requisite results. Some attention to superstition.

Yes, they seem to be struggling right now, but when my son and I attended the Man City match, at that point Man City was the team to beat. He and I had eaten at a chain called Pizza Express before that match. Success followed, so on this night before the Barcelona match, my husband and I repeated that action. One can’t be too careful.

I couldn’t recall exactly the route my son and I took to the Man City match, but since the restaurant is close to Goodge Street station, I had to believe that we’d boarded there and taken the Northern line to Piccadilly. Thus, my husband and I did the same on the way to the Barcelona match.

On the night of the Man City match, my son and I definitely exited the Tube at Arsenal because the train had not stopped at Holloway Road. It didn’t for the Barcelona match, either. No way to mess up that.

The train was packed to the gills and stopped and started several times for no apparent reason. Very hot in that train. When the doors opened at Arsenal station, the cool air was quite a relief.

The normal procedure for using the tube is that you first use a machine to be issued an “Oyster Card,” on which you place any amount of value using cash or a credit card, like any gift card. Then when you enter and exit a Tube station, you place your card on a reader and it determines the cost of the journey and deducts what you owe from the card. At some point your balance will run out, so you have to “top off,” i.e., add more value to the card. If you fail to use the reader when exiting the tube, all kinds of mayhem may occur on your card.

I’ve spoken before about how the world has seemingly become less diverse, perhaps by virtue of cultural crossover and the ease of travel. In the past, it’s sometimes been said that the UK and US are separated by a common language, English, but I find the differences not so notable in practice. Perhaps I’ve become acclimated by doing so much football-related reading on websites originating in the UK.

Where I really notice differences is in language used in public transit. Public transit in London is where we hear and see the famous “mind the gap,” which is not terminology you’d hear in US transit. In London, you’ll hear public transit 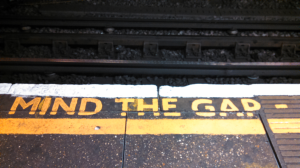 messages in which it is explained that “there is a good service operating on all other lines.” In the US, they probably wouldn’t bother to tell you this, but if they did, they would say something like “service is good on all other lines.” This has caused me to wonder whether this variety of language difference is really US/UK, or if the transit service in London has just become so insulated that they don’t recognize the use of their own jargon in communicating with the public. The public uses transit so much, it seems normal.

I always forget between match times about this announcement, but each time I attend a match and hear it, I snicker. I think my brain first hears the original phrase, “Touch your oyster” before it registers the second part. So it first responds, “Eeew!” or “Certainly not here!” But then it hears the second part, “on the reader,” and it thinks something like, “Really, should one touch one’s oyster on anything? Not sanitary, for the poor reader or for the poor oyster.” How that announcement would be helped by adding “card” after “oyster.”

We were thoroughly searched at the gate into the Emirates. My purse was checked twice. Mercifully, the women’s search line was teeny tiny. The men stand in a giant pool, pushing their way to a line that becomes another pool that becomes another line, to be searched before entering. I waited many minutes for my husband to appear through the turnstile.

Champions League matches are special and you could feel it inside the stadium. There was a giant soccer ball made out of cloth or plastic at center field that was vibrated by volunteers when the Champions League hymn was played. Spotlights were projected all around the stadium. We were all given a plastic bag to hold up to form a pattern at a particular moment before the match. Some people had a red bag, some a white bag, and some a silver bag. When we held up the bags, I couldn’t quite tell what was spelled out by the pattern. It looked like “London” on one side of the stadium. I couldn’t read the other side at all. If one side really spelled “London,” I can’t begin to guess what the other side said. 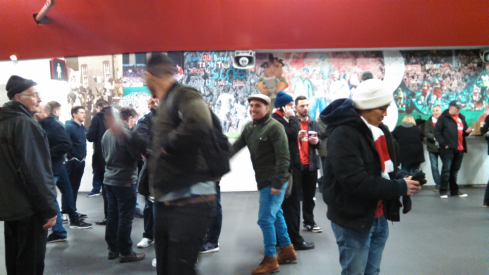 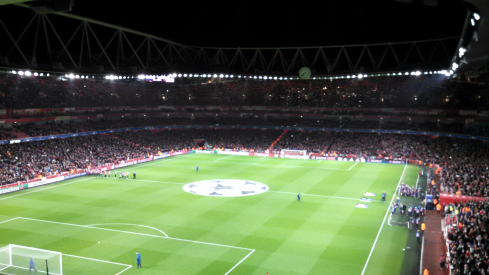 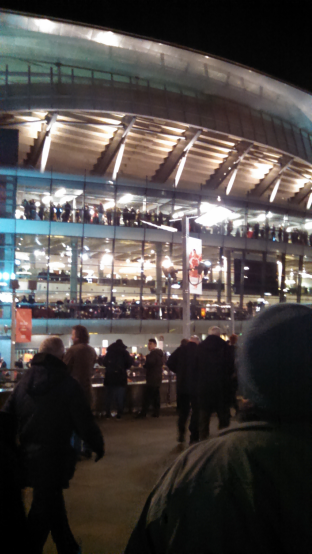 The fans were jacked up and ready to play our part. We did much singing, we lamented–and, more vociferously, disputed–the referee’s calls and non-calls, we cheered our men on. Our guys did well for a long stretch of the match. Kept Lionel Messi, the best player on the planet, relatively quiet. Kept the best front three players quiet, really. And found our way into their box with the ball on many occasions, although we didn’t make any of those times count. We were not cowed by playing the best team in the world. It was 0-0 at halftime.

But this came to an end, as Barcelona counterattacked quickly in the 71st minute. Before our guys were back and organized, there was Messi, the best player on the planet, unmarked. The ball was passed to him and he coolly placed it in the back of the net.

Those Barcelona fans must be so used to goals that they were otherwise occupied when the ball went in. A cheer went up, but it seemed like it was at least five full seconds after the ball was in. Maybe I just anticipated it better than they did.

We Arsenal fans didn’t lose faith; we kept on cheering and we kept on singing. But then Mathieu Flamini, who’d just made his way onto the field a minute or two earlier as a substitute for Francis Coquelin, fouled Messi in the box. Penalty, with fewer than 10 minutes remaining. Interestingly, quite a few Arsenal fans got up and left, before the kick was even taken. As they must have expected, the best player on the planet did not miss. 0-2.

We kept at it, with no success. The full-time whistle blew, and my husband and I ran out of the stadium as fast as we could. Outside the stadium, I could still hear some fans inside, singing to the team.

Because people had already started leaving before the final whistle, the crowd was much more well-established in the street leading up to the Tube and it was a much longer wait to get through the station than any other time we’d come. Some people were in a more foul mood than usual (“Would you stop pushing me?”), although most people still seemed to have good humor about them. There was a gap in the fence that was being used to herd us and the crowd started to make its way through. A worker was holding out his arms, I thought to slow us down into the chute. Actually, he was trying to stop us, but we were already through by the time I realized that. “I think he’s a bit new to this,” one of our fellow scofflaws said, cheerfully.

We got into the station where the announcement was repeating: If we had a paper ticket, we were to walk through to the trains. If we had an Oyster card, “Touch your oyster on the reader.”

I smirked immaturely. And touched my oyster on the reader. As required.

I did everything right I could think of for the good vibes to make it to my team, heeded every superstition I could think of, but we still lost. On the train ride back, my husband reminded me of the very important thing I had NOT done for this match: I had failed to print my tickets out in color after they’d been transferred to me. I do usually print them in black and white by accident before I do it the right way. I always feel far more excited when I see the tickets in color than when I see them in black and white. They seem more real in color. But this time, I accidentally printed them the second time in black and white. I told myself at the time it didn’t really matter, but that was just wrong.

When grown-up David and a few of his wimpy friends fight Goliath, it is imperative to get the details right. 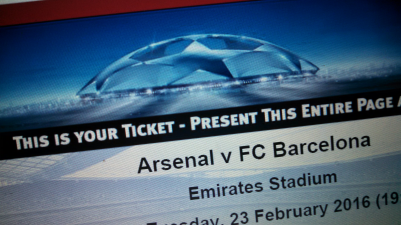 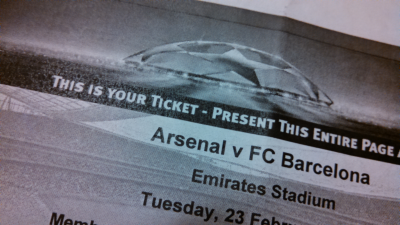 We play Barcelona again in a few weeks at their stadium, Nou Camp, and our uphill battle has risen by many degrees. In the Champions League, the winner is a winner on aggregate, but away goals count more than home goals. We have to score at least three goals and probably keep Barcelona from scoring twice to win it, in their formidable stadium. Stranger things have happened, but usually something not so strange does.

I am writing from the plane back to Chicago. Our next trip is a bit up in the air because the FA Cup tie with Hull City, which requires a replay, has made it likely that the Premier League match we were set to attend will be rescheduled with little advance notice and probably for the midweek.

Arsenal is now out of the Capital One Cup, alive in the FA Cup, in trouble in the Champions League, and in decent position in the Premier League. All to be played out between now and the end of May. Exciting times ahead, surely.

We’ve attended 6 matches in total, gave away tickets for one, and have two more to go. My oyster [card] will be touched on the reader only four more times.

2 thoughts on “An oyster’s touch”