After visiting the Albert Hall we walked back to our hotel, grabbed our stuff, and headed back to Gloucester Road Tube station. As I mentioned, Gloucester Road Station was much closer to Heathrow than any we’ve been near in previous stays, so that meant a longer ride to Arsenal. The car was packed with people as is so often the case on a Sunday. It seems all of London is going someplace or another, almost in the same numbers as rush hour. We were quite a ways down the line before we began picking up fellow Arsenal fans heading to the match.

When we got to Arsenal station, droves of people exited, some singing She Wore a Yellow Ribbon, the song associated with the FA Cup. It was still sunny and everyone was in a good mood.

I wrote in my post, An oyster’s touch, about the unfortunate announcement that has been made at Arsenal station with regard to the Oyster cards when we’ve visited. This time the announcement was changed. We were directed repeatedly to “validate our Oyster cards.” I know it would be presumptuousness of the highest order to take credit for the change in lingo, but somehow I also felt validated.

It was relatively early and getting through Security was fast, though no less thorough. My husband and I walked up to the upper level concourse and had a beer, looking out the floor-to-ceiling windows. We have often enjoyed looking up at the fans standing in the glassed-in upper concourse from the ground outside, and this time we enjoyed looking down, watching fans streaming into the stadium. I love the Emirates so much. I always feel right at home there. It occurred to me that, as new as it is now, one day the Emirates will be gone, maybe in my lifetime, as it inevitably is replaced by another stadium. I’ll feel about the Emirates the same way long-time Arsenal fans feel about Highbury. Maybe I won’t have the same number of memories, but I’ll have wonderful memories. 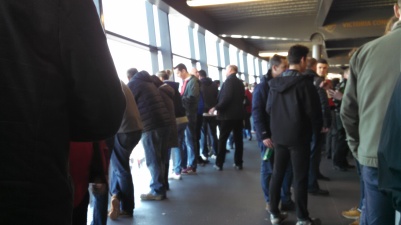 I guess I’m already nostalgic as this wonderful season at the Emirates is coming to an end. Only one more match to go.

We got to our seats not long before the teams were in the tunnel. The famous Clock End was filled with Watford fans. We weren’t sure if the FA requires a larger allocation to away fans, or if Arsenal needed to open more seats to Watford fans because Arsenal fans didn’t buy. Much has been made lately of the missing Arsenal fans, which were mostly visible–or should we say invisible–in the section where the box seats are. Our young neighbor in the seats to our left, the one who left the Barcelona match before Lionel Messi even took his penalty, arrived late as he almost always does, and said “Excuse me, my lovely,” as he walked in front of me, as he always does. 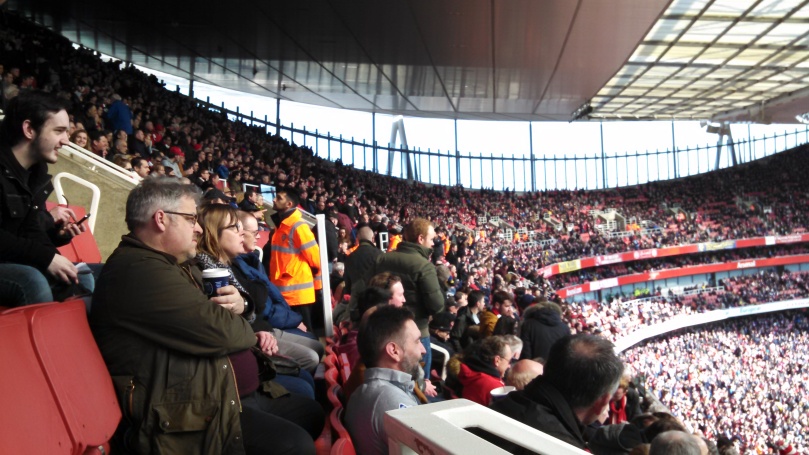 The match. Well, it started well and Arsenal controlled the match. We got in position and took shots, but nothing on target. The new guy, Mohamed Elneny had a very solid match, looking good connecting the back to the front. He even got off some shots himself. Some wild shots to be sure, but not bad to take some on his first home start. Ozil looked good and had some pretty and effective moves that opened the field. And Alexis was energetic. Watford barely got anything going offensively in the first half, with regular interceptions each time they managed to get forward. Watford completed as much time-wasting as possible, their keeper even getting a yellow card because of it. (He was hardly bothered by it, and kept it up for the rest of the match.) The half ended 0-0 and we were feeling positive at the start of the second half.

The second half was much like the first except for one thing. Watford scored on a completely benign throw-in that got to the forward in the center of the box. He managed a turn and shot, avoiding our goalkeeper and finding the back of the net. And then, not so very long afterward, a Watford player shot a thunderbolt from far out. It practically ripped the net. 0-2.

We struggled for a period after that as Watford no longer needed to score and just needed to keep us out. It took us a while to find our feet again, but we did. Danny Welbeck, who’d been part of a triple sub, managed to score. 1-2.

We tried hard, but as has happened so often this season, we just couldn’t score. We hit into the keeper’s hands, over the bar, to the left and to the right. It ended 1-2.

Our reign in the FA Cup has ended, and at a tricky time for the team. We just can’t seem to get fully back in the groove.

Now, how it felt in the stadium and how the loss has played out more publicly seem to me to be two different things. It’s true that some fans left with five minutes to go, but overwhelmingly, in the stadium, we were supporting and pushing and cajoling our team to a successful outcome. And at the end, I felt that there had been a tremendous effort overall. Yes, a few of the guys frustrated, but my overwhelming feeling was the effort was there, the penetration was there, but the shooting failed us again.

I had watched an entertaining match that didn’t end the way I wanted. I left with thousands of fans who clearly were not destroyed by the result. Even my neighbor to the left, the one who didn’t even stick around to see Lionel Messi take the penalty a few weeks ago, hung in almost to the bitter end. We streamed into the sunshine and over to Arsenal station. I heard only one group of three talking animatedly about the need for Arsene Wenger to move on. There was no singing, but there was no devastation, either.

Well into the trip back to Gloucester Road, when the train had become marginally less crowded, a guy got into the car. Once the door closed, he looked around and began preaching. He was praying for us, and for our salvation, he said. He noticed that there were Arsenal fans in the car. “Your team Arsenal has lost,” he reminded us (as if we could forget!), “But God’s salvation can never be lost.” He repeated that he was praying for us, and some in the car seemed happy with this news. Others, neither happy nor unhappy. The train arrived at another stop, and I thought he was getting out. Instead, he made room for a young woman who was boarding the train. The door closed again, and I assumed that he would start up again. But he didn’t. He had said what he needed to say. He got out at the next stop.

We got back to Gloucester Road station and headed over to Hereford Arms. I will never again be in London on a Sunday and forego my traditional roast like I did in my very last visit. This time I tried the sirloin roast because Hereford Arms specializes in it. My observation is that Hereford Arms has better Yorkshire pudding than the Princess of Shoreditch, but everything else came in second place. My husband had the roast chicken and concurs on the Roast ranking. Princess of Shoreditch is the one to beat. 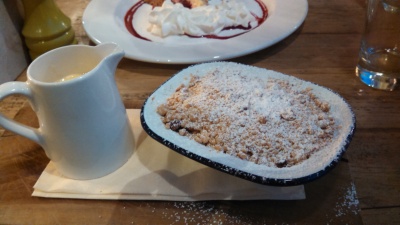 But I have one more visit to London and one more roast to consume.

Londoners, send me your favorite pub for roast. It wouldn’t do to have multiple regrets. Although we are now quite unlikely to take the Premier League trophy and maybe will be lucky to have the infamous “fourth place trophy,” we’ll need a fitting celebration to kick off next season.

What has disappointed more than anything else about the match is the behavior of the broader Arsenal family. The nasty tweets, the piling on, the press coverage. Teams lose, even those who should be destined for something better. To say Arsene Wenger has lost it or never had it is nothing more than unhelpful hyperbole. Getting your anger out is one thing, but there comes a point when all your anger is doing is feeding itself, and building and building into a giant, destructive ball of anger.

It’s time for Arsenal fans to take a deep breath and try to relax. Do some yoga, take a walk. Go get salvation on the subway.