So many times during the weekend, I was pinching myself to be back so unexpectedly in London. I had told myself at the end of last season that I had really seen everything I wanted to see in London, but being back has done nothing but give me a much longer list of sights I want to see.

Likewise, getting back to the Emirates and into our familiar seats was a quick reminder of how much it feels like the place we should be. I did not let me mind rest on it much in the six weeks between the end of last season and my husband insisting that we reconsider due to Brexit, and I didn’t think about it very much even after we understood we could have the tickets and waded through the draft for tickets and payment for them. But riding the train to the match, and walking out of Arsenal station, and across the Ken Friar Bridge, and taking the requisite picture of Tony Adams’s statue, and looking up at the people in the beer garden from street level, and later down at the people at street level from the beer garden, all of these things were like one extended Homecoming. 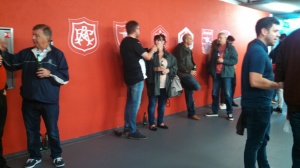 The match itself was nothing to write home about, but this is a blog, so what choice do I have? Arsene Wenger had a few new options to work with after his late buying spree during the transfer window, and he rather quickly put them to work. Arsenal have a Champions League match on Tuesday, so he rested some people who were away on international duty for the past few weeks. New boys Shkodran Mustafi and Lucas Perez both were put right into the starting lineup. We should say “new men” per Arsene’s commentary that he now had men to work with.

What is also true is that he has a number of options for each position which means that, at this early point of the season, the many options are not necessarily gelled as a team. They did not gel much on Saturday either, although both of the new guys did all right. Perez had little service and couldn’t accomplish much, but Mustafi was hugely influential in the match. One of his first touches produced a mistake, and fans around us were quick to note his £35 million price tag. He also had a later gaffe where he whacked the ball over the end line so far from the most advanced forward, there was no way any Arsenal player was going to come near it. My husband deadpanned, “I could do that for half the price.”

But in the end Mustafi had a decent first day, with many touches and passes, and solid defending. It must be said that Southampton got through on far too many occasions and we were saved only by bad shooting on their part.

Southampton scored the first goal after a fairly dominant start, courtesy of a free kick just outside the area on a presumed foul by Nacho Monreal. We Arsenal fans say it was a referee error on a Southampton dive, but the morning newspapers failed to mention that part. Hmmmm….. What the papers did mention is what happened next. The shot was deflected onto the bar by Arsenal goalkeeper Petr Cech, and bounced off of his prone body into the goal. Ugh.

After a long time, Arsenal got a goal on a corner kick, a bobble producing a beautiful bicycle kick by defender Laurent Koscielny. In the stands, it took us a while to figure out who had scored the goal….we were pretty sure none of our strikers could produce a beauty like that.

The match was nearly over and we were heading for a 1-1 tie when Olivier Giroud, who’d been substituted on for Perez, was dragged down in the box. The referee pointed to the spot, and everybody worked on icing Santi Cazorla, who was holding the ball at his hip before placing it to take the shot. We fans were singing his name, and a couple of Southampton players were subversively scarring up the spot where the ball was to be placed before the shot. Meanwhile, Laurent Koscielny was writhing in the ground in pain, having taken a hit in the face right before all of this went down.

But Santi put the shot in, right down the middle, the way he usually does, and for some reason gets away with. He didn’t miss the Southampton goalkeeper’s feet by much. We had to hold on for what felt like a million minutes, but could only have been about two.

It wasn’t a pretty match, but we came away with the win. Job done.

Then my husband and I went from the North Bank of the Emirates to our neighborhood near the Thames and found a nice restaurant called Northbank. Northbank had a fabulous view of the Thames and the Shard. I had the hake and my husband had risotto, and we shared mushroom arancini. The restaurant also gave us a lovely cup of mushroom soup with truffle oil and a tiny Brownie. Right up there with the best five or so meals we’ve had in London.

We took the bus over to Trafalgar Square to attend the Mozart Requiem at St. Martin of the Field cathedral, a terrific space for this piece. The Requiem features instrumental and

vocal music, both lovely. The Requiem was dark and beautiful, then hopeful and beautiful, and then defiant and beautiful. My husband wished afterward that he’d brushed up on his Latin to understand the piece better, but I had no Latin or knowledge to brush up on. I enjoyed it very much, even if my interpretation of it turns out to be dead wrong.

We went back to St. Paul’s area and had dessert at Café Rouge. I had the Eton Mess which is this yummy ice cream concoction with bits of meringue and fresh berries mixed in. My husband had Stella Artois for his dessert.

We took a walk across the Millennium Bridge and watched fireworks over the O2 Arena, feeling great on a damp London night with three precious points in the bag.